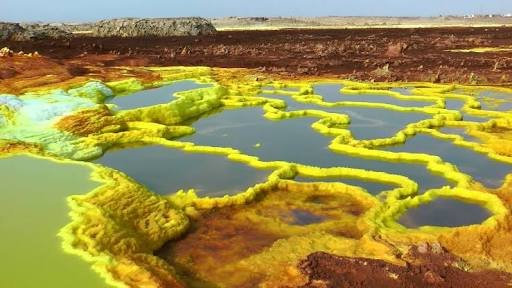 Isn’t it boring, to stay on the same planet for a whole long life! If given a chance, every one of you will be eager to visit some other planet. Planet Mars is gaining popularity due to the growing interest of scientists. But, if you want to visit Mars, then there is no need to board a rocket or put up a heavy space suit. Rather, the airplane will serve the same purpose. There are a few places on the Earth which give you the closest view of the Red Planet.

Here is the list of alien landscapes that replicate Mars from barren, hot, lava fields to cold climates.

The destination is popular for its remarkable undulating appearance. The massive sandstone structures make it look like a Martian landscape. While walking through the dunes, tourists felt strange and surreal. So, it means the place not only looks like the red planet but also feels like it!

Atacama Desert is the driest place on the Earth. The desert has a rugged and weary look. The desolate landscape has weird salt lakes, stubborn sand dunes. All these things when combined makes an ideal analogue for Mars.

Watching the sunset at Wadi Rum will make your heart beat throbbing. It gives the perfect feel for Mars. The sand dunes and rocks are ochre red in color. This location has been also used for shooting Matt Damon starred movie Martian. If the place felt like Mars in the movie, then you must visit this place!

The valley has bone – dry look. Also, the snow doesn’t collect here because the place is so dry and cold. A special type of wind flows through this valley. It is named Katabatic wind. The wind is so merciless that it can freeze one’s bones.   of such extremities, scientists have a deep interest in this place.

Death Valley is located at such an altitude that it features differ from Earth. It has rocky surface, rugged look, rough appearance. It looks more like Martian than earthy. Apart from unique, rocky surfaces, it is also famous for the homeland of the Timbisha Shoshone tribe. Although, this trip can cost you millions.

If you want to experience Mars in a lesser amount of money, then Devon Valley is the right place. It won’t cost you billions or millions at all. It is the largest uninhabited island on the earth. The valley will give you the feeling of a lone planet and not disappoint you. Make it point, never visit the valley in summer months. It is an ideal place where you can test rover technology. It has 12-mile long Haughton Crater.

This place has the same temperature as Mars. It is located close to the Arctic Circle. That is why the place is called the coldest spot on the Earth. The temperature goes down by -96.16 Fahrenheit. Walking naked on the ground can cause death in a minute.

It is an active volcano site. This location is zoned 10 kilometers in length and two kilometers in breadth. The places look so alien due to black and red lava fields and the bubbling pools of mud.

As the name suggests, red color blood waterfall pours. It proves that life can exist in extreme conditions. With the similar environment and similar temperature, life can exist on Mars too.

It is a Martian landscape. Due to its unique pattern and design, it looks more alien. The cliffs are red in color.

The unique pattern of sand dunes replicates the photo of Mars. Earlier, the place water, but due to some unknown reasons, the land dried up leaving the place uninhabitable. The same thing happened on Mars. The trees of Dead Vlei turned so dry that they could not decompose and turned black due to extreme heat.

The canyons have a majestic and rugged look. It looks like Martian landscape on the Red Planet. The clear white – blue sky, the reddish-brown soil covered up the whole surface. Rock-strewn surface completes the look of the perfect Martian landscape. It is the favorite hangout spot on the red planet.

Hawaii is known for fresh waterfalls and serene beach view. Apart from these, there are some pretty harsh landscapes. It has rocky, volcanic, dusty nature. Scientific research has shown that soil composition of this area in Hawaii is same as that on Mars.

This place is a perfect analogue for Mars due to its rugged and stony look. It resembles the surface of the Red Planet. It has a favorable atmosphere and temperature conditions as of Mars. So, do visit this place!

The area includes 3 buildings and 29 contributing structures. The walls are constructed from thin, flat blocks of the local sandstone. It gives a distinct red Martian color to that place. In future, if the property of Mars (if any) decided to build any monument, then it will have a resemblance of Wupatki National Monument of Earth.

Researchers suggest that this place has some unexplainable resemblance to the planet – Mars. Research is going on the tree line on the Pico De Orizaba volcano. It is the world’s highest tree line. It suggests whether it is possible to create a human colony on Mars.

If you want to try any adventure and at the same time not want to spend billions and trillions on the trip. Then, make your plan to visit these places with our friends and family. Hope you enjoyed reading!

8,275FansLike
2,100FollowersFollow
219FollowersFollow
Previous articleKleptomania- A Disorder That Makes You Steal!
Next articleDo You Know Why Disney Characters Rarely Have Mothers?

Surprising Health Benefits Of Including Red Wine In Your Diet!