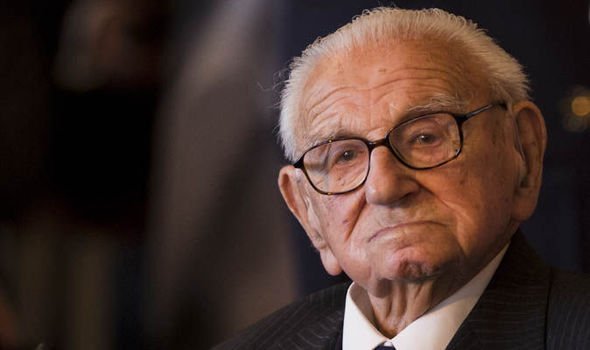 We’ve all read stories about fictional superheroes jeopardizing their lives to save the day. But reading about a hero who saved hundreds of innocent souls in real life is a rare occasion. One such real life hero, whose story remained untold for over 40 years, is Nicholas Winton, a stockbroker from London who saved the precious lives of 669 Jewish children from the Holocaust.

Nicholas Winton was born on 19th May 1909 in London. His parents were German Jews who had moved to London two years earlier, they had changed their last name from Wertheim to Winton, and switched to Christianity in order to mix-in into the new city.

In 1938, shortly before World War 2, Nicholas was working as a young stockbroker in London and was cognizant of the various atrocities being carried out towards Jews under Hitler’s rule. He knew that the situation was only going to get worse with each passing day as the spread of Anti-Semitic feelings among the masses was on a rise.

Rather than fretting over the situation, Nicholas Winton decided to step forward and do something before things get worse. Hence, during the Christmas of 1938, Nicholas changed his vacation plans of visiting Switzerland and instead made a decision to visit Prague and give a hand to Martin Blake, an associate for British Committee for refugees from Czechoslovakia.

During his stay in Prague, Winton realized the gravity of the situation after witnessing the conditions of Jews in German-occupied -Sudetenland, first hand. Most refugee camps were already full with people who were made to leave their houses and families involuntarily. The pain and the suffering in the eyes of the innocent people pleading for help urged him to find a solution.

So, Winton devised a plan, a plan so dangerous that it seemed almost impossible to execute. Even though England’s immigration process was made very strict due to external tensions, Winton was positive that he could arrange for an evacuation of young refugees by using his contacts and resources from London. Subsequently, Winton along with his colleagues Martin Blake and Doreen Warriner set up temporary headquarters in Prague and initiated the process of listing and collecting names of families who wanted to send their children to a safe place.

Owing to the increasing mass aggression against refugees, the transportation to England had to be done quickly. Winton tried his best to find foster families for all the children. He put up posters and called people personally, persuading them to help and provide shelter to the refugee kids. The task was mammoth, but he was successful. After the living arrangements were finalized, the excavation began.

Eight trains packed with refugee children departed from Warsaw, between March and August 1939, passed through the heart of Nazi Germany and reached England safely under the guidance of Nicholas Winton. He also appealed to the then US president Roosevelt to give shelter to more children, but sadly didn’t succeed and later added that “2000 more children could’ve been saved if they [US] would’ve helped”.

On the other hand, Sweden agreed to take refugee children in, after some persuasion. The last batch of 250 children, who were supposed to leave Prague on 1 September 1939, unfortunately never made it to England as Hitler invaded Poland on the very same day.

The 669 children, who did make it to England, got another chance at life, all because of the audacious deed of Nicholas Winton and his colleagues who put their life on the line to ensure the safety of poor innocent children.

Nicholas Winton never spoke about this perilous mission to anyone. No one knew of his heroic act, not even his own wife. The secret finally broke out when Winton’s wife accidentally stumbled upon a scrapbook in her basement with names, pictures, and information of all the children his husband had rescued from Holocaust.

The news about the discovery of the scrapbook was made public by his wife and in 2003; Winton was knighted by Queen Elizabeth II for “services to humanity, in saving Jewish children from Nazi-occupied Czechoslovakia”. He was also awarded the highest honor of the Czech Republic, the Order of the White Lion (1st class), by Czech President for his humanitarian work.

Nicholas Winton dared to do what others never even dream of doing. His story will forever continue to inspire and urge people to selflessly step forward and do what is right at all times.

Africa has been the home to unsolved mysteries for ages. The continent is adorned with lands that seemed to have been veiled by nature...
Read more

Flavors make the food interesting. These flavors are not only for sensory impression but also serve a higher purpose. It satisfies our taste buds...
Read more

Going to college is an exciting time in which you can leave all earlier perceptions of yourself behind and completely reinvent your image. One...
Read more

A mommy makeover is a popular cosmetic surgery procedure that many women choose after pregnancy and childbirth to restore their pre-pregnancy body shape. The...
Read more
Previous article
Most Unusual Ice Cream Flavors You Need To Try This Summer
Next article
Top 11 Psytrance Festivals For The Ultimate Rave!

How Your Personality Is Determined By Your Pets