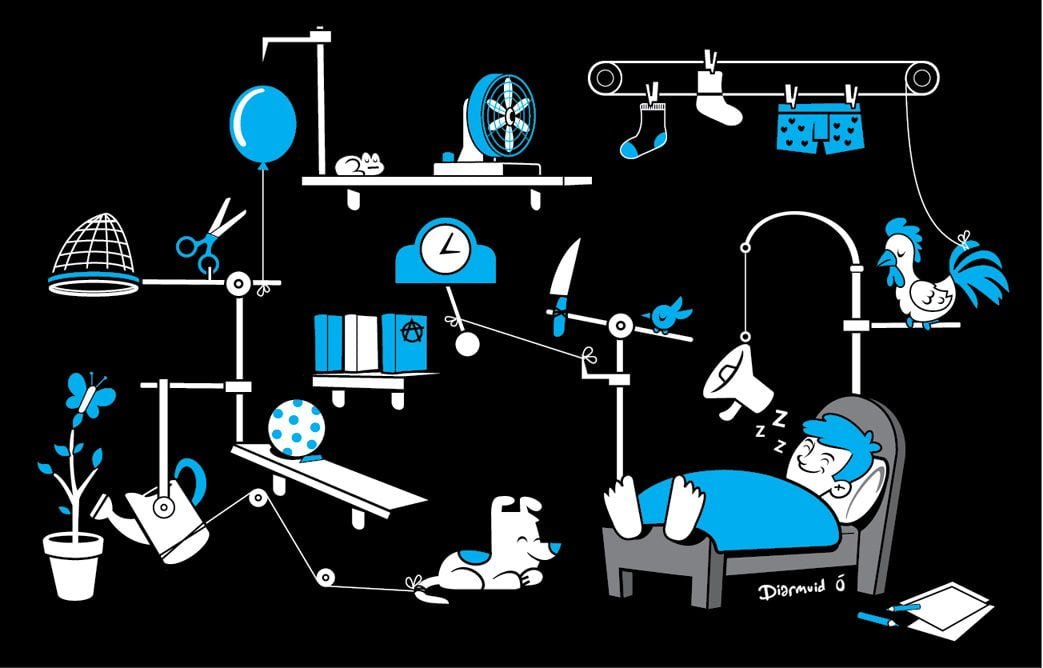 Many simple machines can make complicated tasks easy. Science and technology have come a long way so that we can perform hard and tedious tasks just at the push of a button. But Rube Goldberg machines are different- they are designed to achieve an easy task in an indirect and overly complicated manner. These machines usually consist of basic, unrelated objects. The action performed by each object triggers the next step, and in a chain reaction manner, a goal is reached.

Table of Contents show
Professor Butts and the Self-Operating Napkin
Who was Rube Goldberg?
Rube Goldberg Machine Competitions
How Can you Make One?

Professor Butts and the Self-Operating Napkin

Here is an example: Soupspoon (A) is raised to mouth, pulling string (B) and thereby jerking ladle (C), which throws cracker (D) past bird (E). The bird jumps after cracker and perch (F) tilts, upsetting seeds (G) into bucket (H). Extra weight in bucket pulls cord (I), which opens and ignites lighter (J), setting off skyrocket (K), which causes sickle (L) to cut string (M), allowing pendulum with attached napkin to swing back and forth, thereby wiping chin.

Who was Rube Goldberg?

Rube Goldberg, a cartoonist, first invented this kind of machines. Rube Goldberg was born on 4 July 1983 in San Fransisco. As a teen, he enjoyed drawing and even received some informal art education when he worked for a sign painter. His father, however, persuaded him to get a degree in mining engineering. He eventually designed sewer pipes for the city of San Fransico. Bored of this job, Goldberg started drawing strips for the local newspaper. He then moved to New York and became a cartoonist for the Evening Mail.

Using the techniques he learnt from his engineering background, Goldberg drew outlandish, convoluted machines that aimed to achieve a simple goal. People fell in love with his “inventions”, and it earned him a lot of fame and popularity. His cartoons were published in newspapers all over the USA. His works were also displayed in New York’s Museum of Modern Art, and Goldberg even got the chance to go to Hollywood. His script, “Soup to Nuts”, introduced a trio that would gain infamy as the Three Stooges.

The Merriam-Webster Dictionary even added the phrase “Rube Goldberg” as an adjective in 1931. It meant “accomplishing by complex means what seemingly could be done simply”. Goldberg enjoyed making people laugh with his comics, and sought to see the humour in everyday situations. He described his inventions as a “symbol of man’s capacity for exerting maximum effort to accomplish minimal results”. It is estimated that Rube Goldberg drew about 50,000 cartoons in his lifetime.

The idea behind Goldberg’s devices was so innovative that it has since been adapted countless times in popular culture—in Tom and Jerry cartoons, the board game Mouse Trap, episodes of Sesame Street, and the films Back to the Future and The Goonies, to name just a few.

Over time, people started building actual Rube Goldberg machines to witness science and engineering in action. His works inspired millions of people to try and develop their own elaborate machines and have fun while doing so.

Today, there are annual competitions to build Rube Goldberg machines. In 1986, an engineering fraternity from Purdue University in Indiana called the Phi Chapter of Theta Tau started the annual National Rube Goldberg Machine Contest. Every year, groups try to make the most complicated and creative machines to win the contest. The devices get increasingly complex. A Purdue University team once won the competition with a machine that turned on a flashlight via a 125-step process that included a toy rocket, a simulated meteor, and a mock fire!

Since 1988, there has been an official Rube Goldberg Machine Contest that challenges people from all around the world to create their own contraption. The theme for 2019-20 is “Turn Off a Light”.

While creating Rube Goldberg machines technically fall under the STEM (Science, Technology, Engineering, Maths) field, it touches many other domains. Building one encourages teamwork, problem-solving, and communication. It hones one’s ability in maths and physics. Even designing one requires an element of storytelling, artistry, humour, and spectacle. Yes, Rube Goldberg may have studied engineering, but he spent most of his life to drawing cartoons that would entertain people.

It is a pleasure to watch the genius of Rube Goldberg machines unfold. The suspense and excitement combined with the sheer talent of building one are enough to classify the devices as not only wonders of science but works of art as well.

How Can you Make One?

If you are interested in building a Rube Goldberg machine, there are many tutorials online on how to get started. It isn’t necessary to have a lot of fancy equipment. Chances are, if you are creative enough, you can make one with material that is already available inside your house! It is a fun team activity, so if you plan to do this with a group of friends or your family, your weekend plans are sorted.

If the idea of physically building one intimidates you, there are apps and websites on which you can virtually create a Rube Goldberg machine.

Since Goldberg was first and foremost a cartoonist, why not pay a visit to some popular cartoon characters?

The retro look is making a comeback, and the concept of mixing old with new is becoming increasingly popular among homeowners. It is easy...
Read more

The first millennium of Indian Theatre and Natyashastra  Theatres in ancient Indian was a very vital form of communication. Literature and Theatre have...
Read more

While the world is busy obsessing over fashionistas, our very own fashion icons are reviving the old times of fashion. The 20th-century style is...
Read more

Sex chat with strangers can be an exciting and interesting experience. It's a great way to explore your fantasies, broaden your knowledge, and learn...
Read more
Previous article
The Remarkable History of Bubble Gum
Next article
Cleopatra: the Dramatic End of a Legendary Life

Why Do Men Have Short Hair? How Did It Start?

10 Rules to Get a Perfect Beach Body this Summer