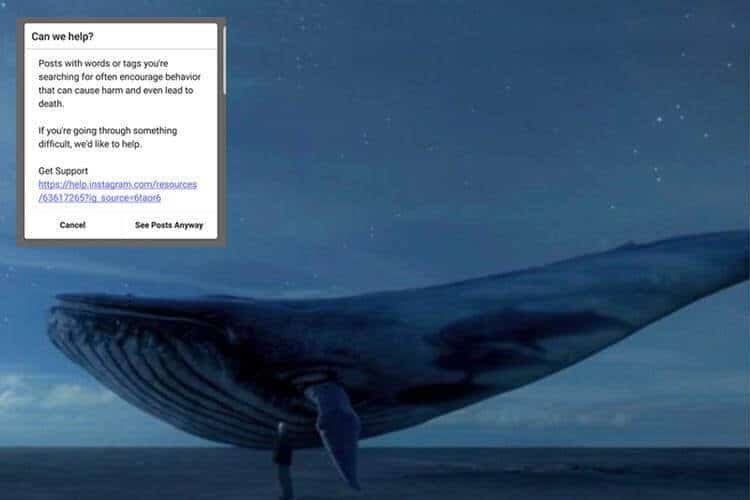 Table of Contents show
The Blue Whale Challenge
What is so deadly about it?
Read also: The Fascinating Story of Aokigahara, The Suicide Forest of Japan.
Image Source

Blue whale Challenge, an Online social media game operated by an anonymous group. Unlike fun online games those of car racing, or mere gunfights; it is a frightening and deadly suicide game, that has been a catastrophe for teenagers in several parts of the world.

At a point of time, the social media was abuzz with this game. The teenagers often used to (and still do) challenge each other to take up this self-destructive game.

What is so deadly about it?

The game apparently is operated over social media by an anonymous group that assigns daily challenges its players.
It goes on for 50 days, where they are assigned to a different and a daring challenge each day.

The astonishing part is that the challenges are bizarre and horrifying. They are extremely self-harming. The game gives tasks like cutting symbols into your skin, watch horror movies and wake up at unusual hours.

As days pass by, the tasks don’t get any simple. After completing a series of gruesome and risky challenges, the only way to win the game is by committing suicide. Each task, also demands a photographic evidence as a proof of completion; that has to be sent to the administrator.

A lot of teenagers (blame their innocence) tend to lose themselves in this labyrinth. The game has targeted mainly the 10-14-year European teenagers who under peer pressure fall into this the irremediable trap. Approximately 130 of European teenagers (though not entirely approved) have died after being a part of The Blue Whale Challenge.

The game has borrowed its name from a common belief about the Blue Whales. They voluntarily beach themselves to commit suicide. Scientists are yet to figure out the actual reason behind this strange act. Some researchers found out that they do so when they are depressed or get lost.

What more shocking is the fact that once you enter the game, there is no looking back.

That’s right! One cannot quit this game in between. If players make any attempt to do so, they have to go through some kind of retaliation.

Read also: The Fascinating Story of Aokigahara, The Suicide Forest of Japan.

Do you remember those science sessions where we had to experiment on the germination of sprouts? Remember wrapping some beans or legumes in a piece...
Read more

If you want to have happy, stress-free and healthy senior years, you must follow a healthy lifestyle. Even if you start taking better care...
Read more

Space holds a vast amount of mysteries and anonymity, which the human race is constantly trying to explore. It has attracted human interest for...
Read more

Mukbang and ASMR eating has been the ongoing trend of this "new generation," which is usually on the phone screen, scrolling through social media...
Read more
Previous article
The Origin Of The Most Famous Abbreviation – OK
Next article
Know About The First Ever Car Accident