Rifath Sharook, An Indian Genius Who Designed The Tiniest Satellite 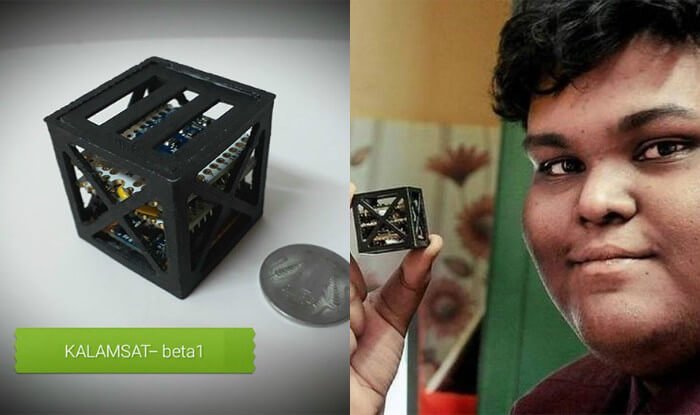 Rifath Sharook, an Indian teen, devised a new satellite. What’s new you ask? It’s the tiniest satellite and lightest one, ever built.

On May 9, 2017, the world of technology was revolutionised by this teen prodigy’s discovery. A team of 8 members has been working on the project. And, the head scientist, the major brain behind the satellite is Rifath, an 18-year-old student, who hails in a town called Pallapatti, Tamil Nadu.

The US-based National Aeronautics and Space Administration (NASA) facility in Wallops Island will launch the designed satellite on June 21. This will be the first time that NASA will operate an Indian student’s experiment.

The teen named the satellite ‘KalamSat’ after the former President of India and nuclear scientist, Dr. APJ Abdul Kalam.

The development was a part of a contest ‘Cubes in Space’, by NASA and idoodlelearning Inc, a global education company. The Cubes in Space challenge was about initiating an experiment which could fit in a four-metre cube. And additionally, possess an accurate mass of 64 grams. The pioneer creation is exact 64 grams. It differs from the usual due to its structure. 3D printing has designed the satellite using reinforced carbon fibre polymer. Surprisingly, this technique is still in beta phase worldwide. Also, the NASA based scientists who judged the contest appreciated the discovery exclaiming “We nearly fell out of the chair!“

Sharook says that he designed the satellite completely from scratch. The discovery is a kind of an onboard computer which includes eight indigenously developed built-in sensors. Additionally, these will measure acceleration, rotation and the magnetosphere of the earth. Only after testing numerous cube satellites, his satellite was concluded to be the lightest of all.

THE PURPOSE OF TINIEST SATELLITE

The primary role of the satellite will be to demonstrate the performance of 3D printed carbon fibre and provide an incentive to plan economical space missions in the distant future. Furthermore, it will have a 240-minutes mission in the space and will operate for 12 minutes in a microgravity environment of space.

OTHER ACHIEVEMENTS OF RIFATH SHAROOK

Moreover, this pioneering creation has not been the only milestone of the genius. Also, on 2015, he added another feather to his cap by taking over the technological world. As a part of Young Scientist India 2015, a competition by Space Kidz India, he, along with his team invented a 1,200 gm Helium weather balloon from the ground in Kelambakkam.

Finally, on June 21, the teen will create history, once NASA launches the lightest and tiniest satellite. And we can’t help but be proud!

8,275FansLike
2,100FollowersFollow
220FollowersFollow
Previous articleHere’s Why We Should Add More Pulses To Our Diet.
Next articleWhy Was Somnath Temple Demolished And Reconstructed 17 Times?

Period Superstitions from Around the World