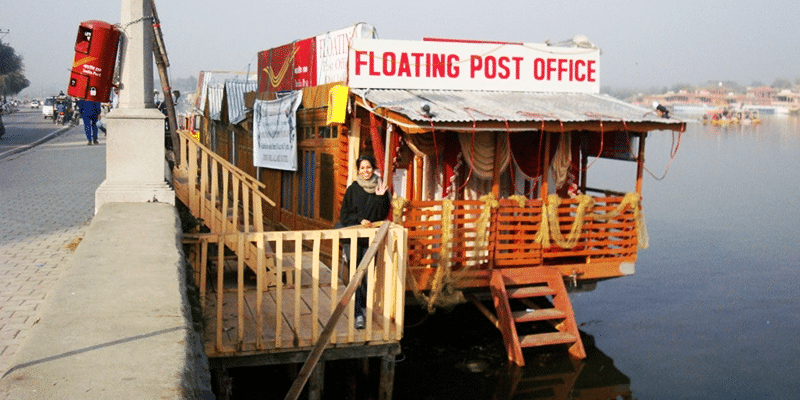 Yes! You read it right. India has its very own First Floating Post Office in Srinagar. Were you aware?

Here is a detailed insight into this unsung existence.

India is known to be the Largest postal network in the world. But yet, there is a feather in our hat! Srinagar in Jammu and Kashmir is a standout amongst the most prevalent and beautiful spot in India. It is acclaimed among sightseers and has a few attractions. One of its significant attractions is the Dal Lake which is known for its natural excellence, its area amongst mountains, and its exquisite climate and feel. Be that as it may, another gem to its crown is India’s First Floating post office! We have something that is first in the world and only in India.

There is something unusual to be witnessed among the elegant houseboats floating on the calm and beautiful waters of Srinagar’s Dal Lake. A Post Office! This Government center is found floating on the yellow Shikaras, attracting hounds of tourists. “ Floating Post Office, Dal Lake” is considered to be the only one of its kind and is built over a beautifully crafted maroon houseboat.

Read also: Interesting Facts About The Country We Live In But You Are Unaware About!

This post office is like any other post office but with a unique seal which is a Boatman rowing the Shikara on the Lake. This heritage post office has existed since the British time with the name Nehru Park Post Office. Another uncommon component of this mail station is that the letters that are posted here convey an extraordinary design with pictures of shining scenes of the Dal Lake and other Srinagar attractions. The Museum in the Post Office features its history and a few captivating postage stamps. The Post Office’s houseboat has two small rooms. One that serves as a Post Office, another is kept as a museum that showcases the postal history of the state.

The Dal Lake which is known as a standout amongst the most lovely lakes in India invokes pictures of excellent Shikaras and houseboats skimming against the setting of snow-clad mountains. This beautiful gliding post office just adds more to its beauty! A must visit, this spot is a favorite Tourist Attraction. Something never was seen or heard by anyone in the Universe.

Something to be Proud for!

Read also: 4 Offbeat Cafes In India That Are Truly Inspiring

Today we can get almost everything online. Just like online shopping sites are growing, there has also been growth in the vaping industry. When...
Read more

Interesting Facts About The Power Of Meditation

From ancient times, our ancestors have been practicing meditation. This is because they know the power of the subconscious mind that exists within us....
Read more

Your body is an incredibly complex machine. There are still plenty of secrets regarding how some parts work, and research into these things is...
Read more
Previous article
Get To Know About The Teeth Archer Of India
Next article
The Oh-So-Amazing Doughnuts With A ‘Natural Glow’- Glonuts

Everything There Is To Know About Coincidences