The Origin Of Samosa- Did You Know That The Mouth-Watering Indian Snack Samosa Isn’t Really Indian! 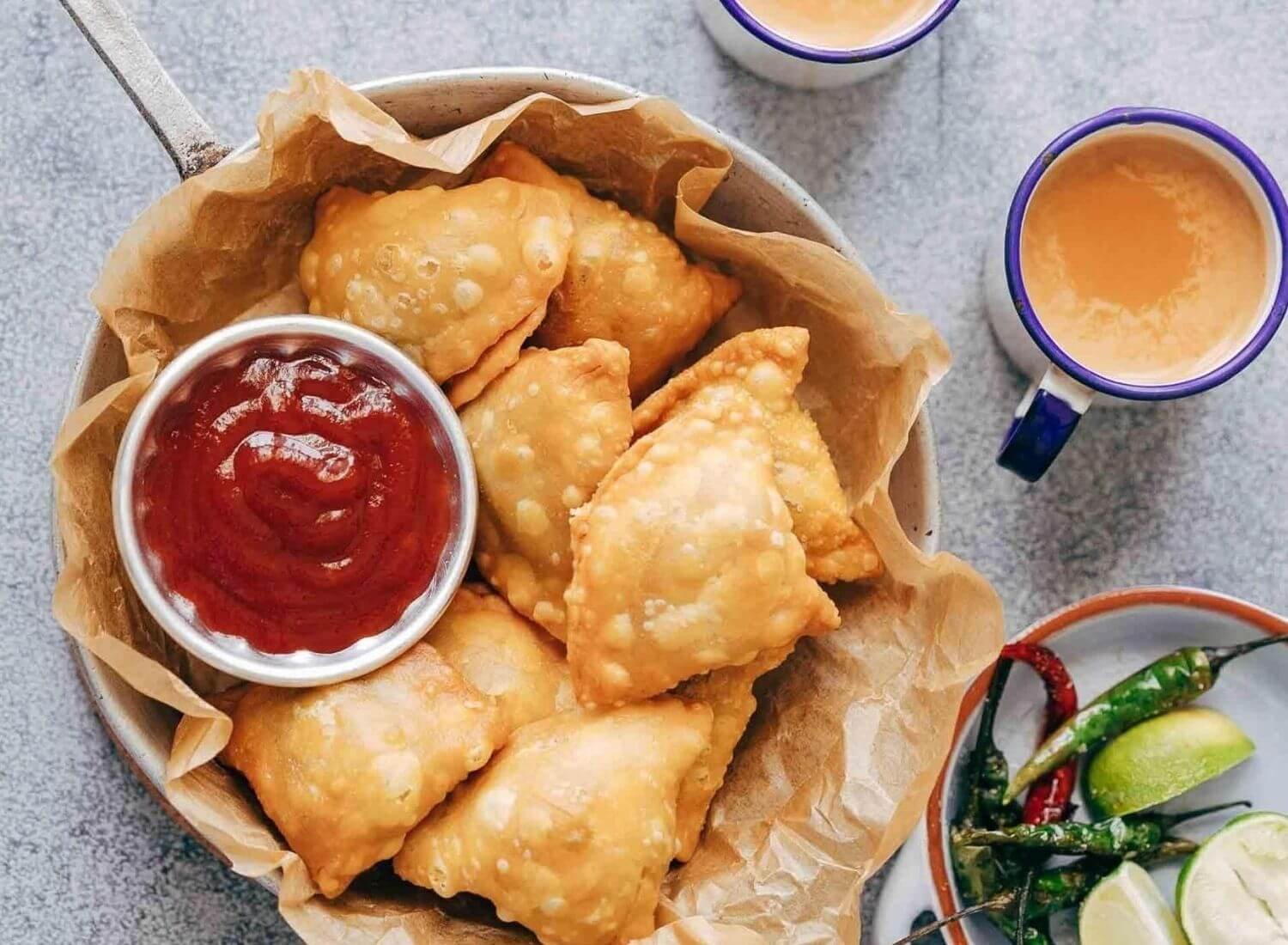 A samosa is taken to be an Indian dish, the spicy vegetable filled triangle. It is fried in oil or ghee and is served as a companion with beverages either as breakfast or evening snacks. But when the origin of samosa was traced it did not end up to be in India, let’s check out where it exactly came from.

Table of Contents show
Origin of Samosa
These golden beauties were actually brought to India by traders from Central Asia or the Middle East and were originally known as “Sambosa”.
In Persia, however, Samosa is known as Sanbusaq, coming from the Persian word “Sanbosag” where they are served as square parcels made of phyllo pastry.
How it came to India?
Abolfazl Beyhaqi (995-1077), an Iranian Historian mentioned it in his history, Tarikh-e-Beyhaghi.

It is a cozy, dark, and gloomy day outside. Showers of rain are drizzling across the window pane, and you are cuddled up in your blankets. A steaming hot cup of chai in your hands and a whiff of freshly made garama garam samosas. Heaven! Right!

What more could any one of us ask for…

Samosas have been a part of our life since forever. Be it as morning breakfast or a tea time snack with friends or as a delicacy served to the guests. Samosa has always been a snack that has remained on the top in the list of eateries. It’s taste, smell and flavor is unavoidable and it’s shape is so mesmerizing that everyone forgets their cholesterol levels and grabs one quickly.

However, did you know that our very own samosas never really belonged to us? Yes the very own Indian samosa is not Indian, despite being served in every Indian house it’s origins lie in Middle east.

These golden beauties were actually brought to India by traders from Central Asia or the Middle East and were originally known as “Sambosa”.

This little snack made its way through the hearts of a lot of people around the globe from Egypt to Libya to Central Asia and finally, India. The name slightly varies across the continent, and so does the stuffing. In Egypt, Samosas were named as Samsa after the triangular pyramids that are there, since it’s shape is also triangular.

In Persia, however, Samosa is known as Sanbusaq, coming from the Persian word “Sanbosag” where they are served as square parcels made of phyllo pastry.

Across the Middle East, the Samosas are made out of thin phyllo pastry dough, or tortillas, or thicker maida roti, stuffed with either minced lamb, chicken, nuts or feta cheese, paneer and never with potatoes and guess what! They were fried in GHEE…Yes, seriously yum. But you see that the samosa has totally different filling outside India. But the credit for the filling that we eat definitely goes to Indians and their kitchens.

It was only when this snack found its way in the Indian hearts after receiving the blessings of the Indian royalty, did we add our personal touch to the glorified Samosas to make vegetarian triangular variants with potatoes, peas, and onion to be served with pudina Coriander chutney and imli chutney.

How it came to India?

Abolfazl Beyhaqi (995-1077), an Iranian Historian mentioned it in his history, Tarikh-e-Beyhaghi.

It was introduced to the Indian subcontinent in the 13th or 14th Century. Amir Khusro (1235-1325), a scholar and the royal poet of the Delhi Sultanate, wrote in around 1300 that the princes and nobles enjoyed the Samosa prepared from meat, ghee, onion, and so on.

Ibn Battuta, a 14th-century traveler, and explorer described a meal at the court of Muhammad bin Tughluq, where the Sanbusaq, a small pie stuffed with minced meat, almonds, pistachios, walnuts, spices was served before the main course.

So now that you know about it’s origin, share this fascinating article with your peers to!

Formal menswear can be intimidating. We've all seen men who look like they're going to a funeral in suits that just don't fit well....
Read more

Your immune system plays a vital role in keeping your body active and healthy. Its essential function is to protect your body from various...
Read more

Most Unusual Ice Cream Flavors You Need To Try This Summer

I scream, you scream, we all scream for ice-cream. Foodie or not, everyone craves this delicious, creamy, and flavored mush that just melts in...
Read more

Sex chat with strangers can be an exciting and interesting experience. It's a great way to explore your fantasies, broaden your knowledge, and learn...
Read more
Previous article
Include These Fitness Foods In Your Diet If You Are A Fitness Freak!
Next article
We Bring To You The 5 Most Famous Paintings Of The World!