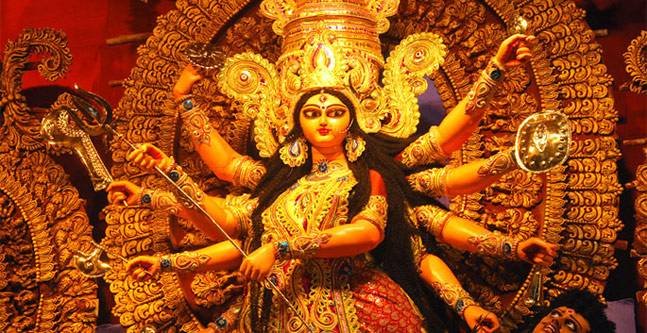 Calcutta is known for the grand, pompous Durga Pooja that happens during the time of Navratri. Not only is the festival known for the goddess Kali’s victory over the demon Mahishasur, but it is also known for the unusual custom of where they get the clay or ‘mitti’ used to make the goddess’s idol from.

For those of you who might not know this, a portion of the clay or ‘mitti’ that is used to make an idol of Kali Ma comes from the red light brothel areas on the outskirts of Calcutta which is termed as ‘nishiddho pallis’ or restricted areas. The priests and the craftsmen go to these brothels and beg for the soil outside the homes of these prostitute women. The sect that was socially excluded from daily life suddenly becomes the most important one during the time of Navratri. Hypocrisy? Welcome to ‘Incredible India‘.

The major components of the mixture to make Durga Ma’s idol consists of mud from the banks of Ganges, cow urine, cow dung, and mud from the nishiddho pallis. There are four reasons why this custom is considered sacred in Calcutta.

Considering how Kali Ma’s victory is something that is celebrated by the entire of Calcutta, and how she is not a socially selective goddess, each and every devotee should be included in the celebrations and the preparations, right? And that is one major reason why this custom is followed- to include the socially excluded, the prostitutes. They are socially excluded, discriminated, and are made to go through every proper inhumane condition and are also taken for granted. To break such shackles, the mud from their part of the city is also taken. But wait. If social inclusiveness is what is to be achieved then why only on this one specific day? And after this day everything goes back to the same exclusion cycle.

The Logic of Purity

The mud collected from outside their houses is considered to be the purest because it is believed that men who visit these brothels leave their virtues and purity at the doorstep of the prostitute’s house. Thus, to get this mud means that it gives extra Shakthi to the goddess’s idol, as it contains purity. The priest must beg for this mud. Even if the women deny it, they must beg for it till she accepts to give them the mud.

The Dominance of Shakthi

Legend says that during the war between Mahishasur and Kali, Mahishasur tried to molest the goddess. The angered goddess killed him for the disgrace he tried to bring about. Kali used all her energy to destroy the beast that looked down upon women. This is another reason why the priests have to “beg” for the mud. They are made humble before the women who they down-trod upon and who they looked down upon. This is to empower the women and to remind the male chauvinistic society that no woman in this world is to be looked down upon or taken for granted. It is said that only by doing so, will the Durga Pooja be fruitful and please the vigilante goddess- the protector of womanhood.

Reducing the Sins of the Prostitutes

When the priests go to collect the holy mud for Durga Pooja, they chant mantras while collecting the soil from the hands of the women in the brothels. It is believed that when they listen to these mantras and contribute to the festival by giving this mud, a major chunk of their burdens are relieved by Kali Ma and they are elevated from the sins they carry. It is to purify their torn souls and reduce them from the burden of sins that they are forced to carry.

No one can deny the goosebumps that can be felt while looking at the powerful idol of Kali Ma during the Durga Pooja time in Calcutta. Kali Ma is seen as the war goddess and known for the vigilante justice path that is taken to reduce evil in society. She is the woman who is seen as the epitome of power. Considering the current plight of women in India, we need Kali – not just for hope and protection, but for motivation-that no woman is powerless and should be downtrodden upon. Every woman is a goddess who when unleashes a Kali from within, can destroy all evil.

Darsh Patel - June 7, 2021
0
Previous articleThings Which A Newborn Baby Leaves In The Mother’s Body!
Next article8 Ultimate Travel Facts No One Has Ever Told You About Travelling!

5 Things Every Traveler ‘Must Do’ at Least Once

10 Eco-Friendly Brands Available In India That Everyone Must Try

4 Reasons Why You Should Start Exercising Immediately

6 Health Benefits Of Eating Watermelons Everyone Should Be Aware Of

Coping With Debt: Best Ways How To Deal With Debt Stress

11 Places Not To Miss In Mumbai As A First-Timer