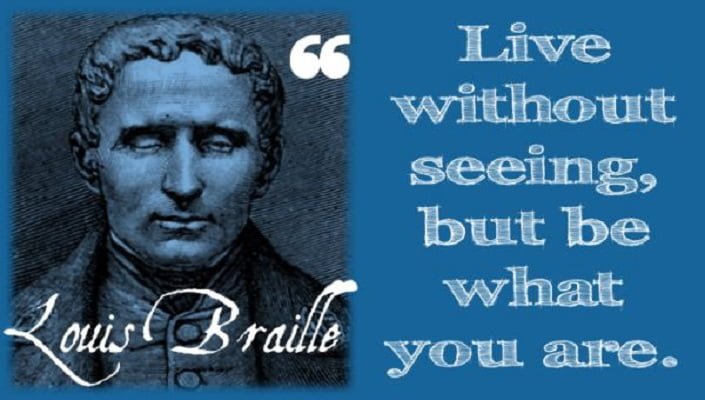 Louis Braille is known for inventing the Braille System, the writing system used by visually impaired people to write and read. He changed the lives of blind people all around the world and was an invaluable contributor to the world as we know It. Let’s have a look at the fascinating life of an extraordinary man.

Louis may have lived his life as a blind person, but he was born sighted. Born on 4th January 1809 in a small town Coupvray in France, Louis lived with his parents and three siblings. Louis often played in his father’s workshop, who was a village saddler.

One day, when he was three years old he was playing with some tools. One of the tools ended up slipping and struck him in one of the eyes. The eye became infected and spread to the other eye as well. Young Louis became completely blind by the age of five.

In spite of being a brilliant child, he had trouble reading and writing at his regular school. At the age of 10, however, Louis received a scholarship to the Royal Institution for Blind Youth in Paris. It was one of the first Blind schools in the world.

However, he was unsatisfied with the way the students were being taught as they were mostly spoken to. He was unhappy with the lack of books and how hard it was to read the huge books with raised letters.

Charles Barbier and his system of “night writing”

Barbier, a former soldier, had invented a system of writing called “night writing”. Louis gained interest in the system when Barbier introduced it to the school in 1821.

The system was originally created for soldiers to share top-secret information amongst themselves on the battlefield without speaking. The writing system consisting of 12 raised dots proved too complicated for practical use. However, Louis was able to modify it and develop a simpler version.

Birth of The Braille System

By the age of 15, Louis was able to come up with a modified and usable adaptation of the “night writing”. He reduced the 12 dots into six dots, making it a much easier system which is now known all over the world as “The Braille System”.

In 1829, he published the first Braille book ever.

Louis Braille was offered full-time professorship in 1833. He taught geometry, algebra, and history. Being musically gifted, he also became a proficient organist and cellist.

Blind students had to study braille on their own as it wasn’t immediately accepted by the public. Even at the University where Louis taught after he graduated, braille wasn’t taught until after he died.

Upon the persistent insisting of blind students, the Royal Institute finally implemented the Braille system in 1854.

The system is now used almost all over the world and has proved to be one of the greatest inventions for the Blind community.

Louis Braille died of Tuberculosis, in 1852, just a couple of days post his 43rd Birthday.

The French government finally recognized and honored his accomplishments in 1952 and moved Braille’s remains to Paris in the Pantheon, where his remains rested amongst the other French heroes, with the exception of his hands which remained in the village cemetery upon the request of the Mayor of Coupvray.

Just another management student exploring the different crazy areas of life one adventure at a time. Books, TV shows, writing, music, animals and coffee are my way of surviving our chaotic existence.