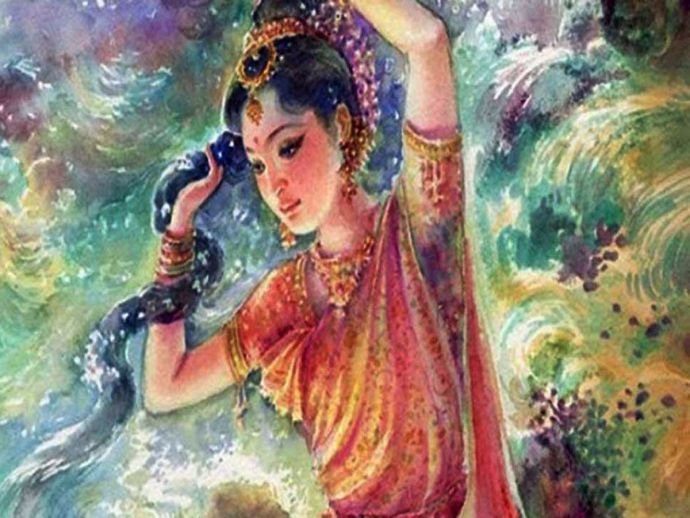 Since childhood, we all have been studying and comprehending various adaptations of Ramayana, focused explicitly on King Dashratha’s four sons. Focused on Lord Ram along with his three brothers Laxman, Bharat & Shatrughan but what makes you raise an eyebrow is the fact that there was Lord Ram’s elder sister too which was first born child of King Dashratha & Queen Kaushalya. Although Ramayana always enjoys the priestly following amid Hindus but most of us are entirely oblivious that Lord Ram had an elder sister named Shanta. You might be astonished to know this, but here are some facts which let your eyes open, your jaw drop and add a page to your knowledge bank. Check this out:

King Dasaratha and his first wife Kaushalya had a daughter named Shanta. Raja Rompad Husband of Vershini elder sister of Kaushalya’s was childless.  Raja Dashratha and Raja Rompad were a childhood friend they studied in the same Ashram. Once, when Vershini was in Ayodhya, she was mesmerized with child Shanta and loved her so much which instigated her to ask King Dashratha for the adoption of baby Shanta, to which Dashratha gave his words that she can adopt his daughter, Shanta. As the promise of ‘Raghukul’ had to be kept, Shanta was adopted by Raja Rompad, the King of Anga Desh (which is present day Bihar).

Read also: Krishna’s Butterball – A Miracle Or A Science

Shanta- The epitome of beauty & quintessence of intellects

Thus being adopted by Anga’s Raja Rompad, Shanta became the Princess of Anga Desh. Shanta was not only beautiful but also was well versed in the Vedas, Art & craft and warship. In the Telugu folk songs, it is described when Ram has decided to abandon Sita after a washerman made a comment, it infuriated Shanta on Lord Ram.

Rishi means sage and Shringa means Deer’s, Horn. Rishi Shringa was born with a single horn of deer on his head. His father was the Vibhandak Rishi. Yeah! Vibhandrak rishi was seduced by Urvashi. Indra, the King of Gods, who feared that the Rishi might gain yogic powers out of his penance which could be catastrophic for an existence of living beings. So he ordered Urvashi to woo the Rishi and break his penance. The father was seduced by the Urvasi by order of Indra, and out of his relationship with the Urvashi, Rishi Shringa was born. However as soon as Urvashi’s duty was done, she left the Rishi and went to the Heaven.

This made the Rishi loathe the entire women race and so he raised his son in a secluded forest from the society. Rishi Shringa never saw any human(& Women Of course!) in his life except his father. He was not even aware of the existence of women. However, the Rishi Shringa had immense power including the power to bring rain wherever he went or kept his feet due to his celibacy.

Read also: The Festival Of Holi Decoded: Unique Destinations In India To Enjoy The Riot Of Colours At Its Best!

One day, when adult Shanta was in a conversation with Raja Rompad, a Brahmin came to visit King Rompad asked for help in cultivation during the monsoon. Raja Rompad was in with the conversation with his beloved daughter Shanta so he ignored the Brahmin due to which lord Indra got offended as it was an affront to Brahmin devotee.  So Lord Indra decided to punish Rompad and hence, it did not rain in the coming monsoon. Princess Shanta was asked to visit the forest to meet Rishi Shringa, as he could only end the drought in the village. Rishi Shringa was totally amazed to see the magnificent beauty of Shanta. She successfully lured the Rishi & bring him in Anga, thus bringing the rain too. Rishi Shringa realized that Shanta was not just beautiful but also intelligent and strong.

Thus the marriage of Shanta with Rishi Shringa was arranged.

Shanta & Rishi Shringa played a pivotal role in the birth of Lord Rama & his three brothers. After Shanta was given in adoption, Dashratha was not able to father any children. However, like any other king, Dashratha wanted a son to continue his lineage and heir to his throne. This is when he invited Rishi Shringa to perform the Putra Kameshthi Yagya to compel the Gods to give him a child. Thus Rishi Shringa acted as Purohit (sage) at the ‘Putra Kameshthi Yagya’ of Raja Dashratha. As a result of the prayers by the Rishi, God Ram, Lakshman, Shatrughan and Bharat was born.

So, this is quite evident that the four brothers were born after the marriage of their elder sister Shanta.

Shringa Rishi Temple is situated in Banjar valley in Kullu, Himachal Pradesh. It is considered as a sacred place for local Hindus of Himachal and believed to be guarded by Rishi Shringa. Also, Rishi Shringa is among one of the eighteen deities of Kullu valley. Here idol of Goddess Shanta also resides with an idol of Rishi Shringa.

Also, there is a temple of Rishi Shringa in Lalitpur District of Nepal in Mahalaxmi Municipality, Lankuri Bhanjyang.

Evidence stating Shanta as a Daughter of Dashratha & Kaushalya

Although there are many theories, conflicts, and contradiction among various adaptation of Ramayan, Valmiki Ramayan has subtle hints in his Bala Kanda Sarga 11. Also, Ved Vyasa mentions Shanta in Mahabharat.The mythology talks about King Rompad who adopts Dashratha’s daughter. In the later pieces of literature, we, however, see the texts mentioning her as an elder sister of Rama.

I am an engineer by profession and have a inclination toward writing & reading. An amateur poet and a travel enthusiast who likes to explore new places.I like to share my insight through writing on philosophy,life,travel ,health & food.Also my love for music is immense and consider it as a best means of catharsis for me!