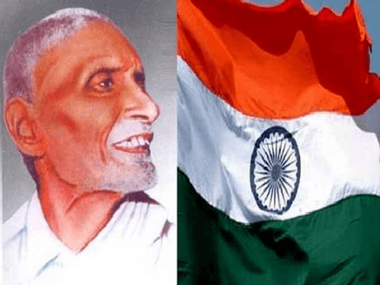 Mother India owes her rise and independence to a lot of nationalists and freedom fighters. These freedom fighters raised their voice and power against the British rule by not just revolting against them, but by evoking the power of patriotism in ways of literature, art, music and drama. The Pre-Independence phase saw the necessity for Indian patriotic symbols which was necessary for the birth of independence as well. One such national symbol is the Indian National Flag. But how many of us know the name of the mastermind behind the design?

Who Designed The Indian National Flag?

Pingali Venkayya was a freedom fighter who designed the Indian National Flag. He was an agriculturist and an educationist who set up an educational institution in the city of Machilipatnam, Andhra Pradesh. This unsung hero was long forgotten and news claims that he died due to poverty in the year 1963.

But in the year 2009 and 2011, postage stamps were issued to commemorate him. It expressed a long due gratitude for all the sacrifices and deeds done by him for the nation.

The Many Versions Of The Indian Flag…

It is imperative to know that there were many versions of the National Flag. All of these versions were used by the freedom fighters.

The first version of the flag had red, yellow and green stripes with lotuses, the moon, and the sun in it. In the center of the flag were the words “Vande Mataram”. This was first hoisted on 7th of August 1906 in Parsee Bagan Square, Calcutta.

The second version of the flag was hoisted in 1907 by the exiled revolutionaries in Paris, led by Madame Cama. This was very similar to the first version. However, instead of lotuses, there were seven stars, which denoted the ‘Saptarishis’.

The third version was the one hosted by Annie Besant. The flag had red and green stripes, with the Union Jack on the top left, the seven stars, and the moon. This was hoisted during the Home Rule Movement and signified the ties and peace between Hindus and Muslims.

But the most famous of these versions was the one which was the one with the Gandhi Charkha in the middle. It consisted of two colors: saffron and green. Finally, the constitution decided on the version designed by Pingali Venkayya to be the sacred one for our nation.

But there are other versions of the story. These versions accredit Surayya Tayyabji, a woman from Hyderabad for the tri-coloured flag that we use today. According to this version which was substantiated by Capt. L Panduranga Reddy, the tri-coloured flag was proposed during the time when the Home rule movement of Bal Gangadhar Tilak and Annie Besant merged with the Congress.

In 1921, the tri-coloured flag was supposedly presented by Pingali Venkayya. However, the book ‘The Last days of the Raj’, by English historian Trevor Royle records the designer to be Badruddin Tayyabji – an ICS officer in the Prime Minister’s office in 1947. Tayyabji insisted that the Ashoka Chakra replace the Charkha, as the latter had a more party orientation in its symbol and could be misinterpreted by many. Thus, the final version was approved in July 1947. And the flag that flew over Nehru’s car was specially made by Surayya Tayyabji.

Who designed the Indian National Flag? There are various versions. Despite all these versions, one thing remains strong- the patriotism. National sentiments and affiliation to the country have always been something we Indians pride ourselves in. And this rich history that we pride ourselves in is the hard work and toil of many freedom fighters and unsung heroes. Thus, respecting national symbols and the history of independence is in a way a moral duty. And that, we as citizens must uphold.

Stress is known to be a silent killer. If you let it persist, you are virtually committing suicide. Anyone with a challenging task or...
Read more

Oily skin is a more significant struggle than having a bad hair day. We have all struggled with our skin, except for those who...
Read more

The Remarkable History of Bubble Gum

Bubble gum is a universal confection- something that everyone from children to adults has regularly. There are so many brands and flavours, and who...
Read more

One of the most significant factors that can be an indicator of overall health is your diet. What foods do you consume regularly and...
Read more
Previous article
Pop-Top For Beer Cans: The Unsung Invention Of The 20th Century You Never Knew About!
Next article
Replace Your Cosmetic Products With These Homemade DIY Cosmetics Today!