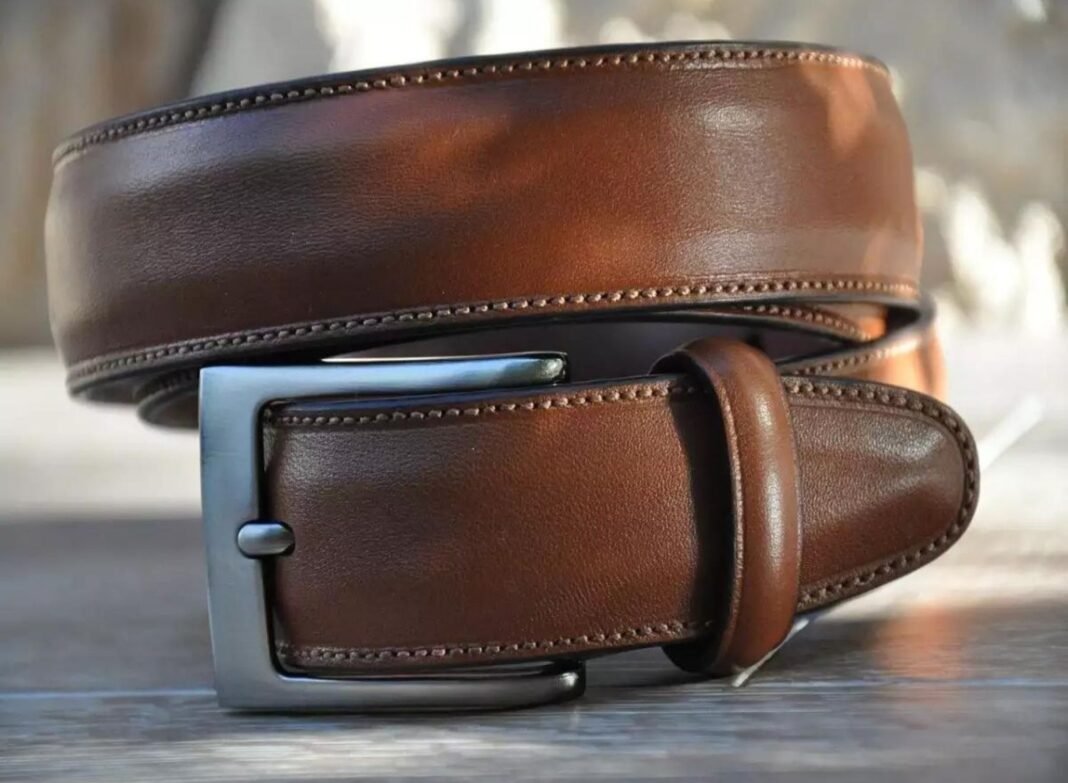 The history of the belt dates back to the time of the ancient states: Greece, Rome, Egypt. In those days, there were narrow strips of dense fabric or leather that were worn to support other clothes. The first belts similar to modern ones appeared among the Persians. They were made from leather cords and decorated with thin metal plates.

The Scythians wore belts not only to hold vestments, but also to fasten weapons and wallets. In the Middle Ages, the belt became an indispensable item of clothing, and remains so to this day.

Today, no modern man can do without a good belt. High-quality and stylish men’s trouser belts give respectability and provide the image of a real gentleman. Most men wear a belt on their trousers all the time.

Therefore, in the wardrobe there should be several options that fit different trousers and jeans.

Having one belt for all occasions is, of course, practical, but finding such a universal option is very difficult.

When choosing a belt, it is important to keep in mind not only the aesthetic component of the purchase, but also the practical one.

1. To check the quality of leather belts, we can simply bend the product in a fist. If the belt is really made of genuine leather, then it will warm up at the bend. But the skin substitute will remain cold.

Or bend in place of the holes and see if it is leather and, accordingly, see the glued belt and the quality of the leather used.

2. We pay special attention to threads. They should not stick out, and the seams should go smoothly and neatly.

Believe me, if the thing is not cheap, then the manufacturers will definitely try to do everything right. All material should be pleasant to the touch and beautiful on both sides.

3. Usually a leather belt has a back and front layer of leather, inspect them. They should be pressed and well stitched. This treatment prevents the belt from delamination during wear.

Sometimes a volume layer is laid between the layers to give roundness – inspect it carefully.

4. I want to draw your attention to the fastening of the buckles with a special emphasis. The fasteners of the buckles should be attached to a small bolt, with which the length of the belt is adjusted.

If you need to adjust the length of the leather belt, then unscrew such a bolt, remove the entire buckle, take the distance from the waist and measure from the fourth hole from the other end, then cut off the excess. Punch a new bolt hole and attach the buckle.

5. In addition, the belt should have two loops that fix the folded part of the belt.

One should be fixed near the buckle, and the second at about a palm’s distance from the buckle.

6. The leather is slightly finished and the edge is not square, but slightly rounded.

The end part is well painted. When broken, the paint should not crack.

Choosing the right men’s belt largely depends on what kind you need. Usually there are 3 types of men’s belts: casual belts, suit and sports belts. Sometimes they talk about universal ones, which are suitable for both suit trousers and jeans.

Casual (casual). This type of belt is perfect for jeans.

The material of the Casual belt can be very different: fabric, leatherette, genuine leather, rubber, etc.

The color can also be the most free shades, up to bright red, acid green or lemon yellow. But, of course, this is for lovers of bold experiments. More conservative dandies prefer the classics: white, black or brown belts.

The width of the casual belt lies in the range of 2-6 cm. The standard width is 5-6 cm and such a belt fits more or less tightly into the straps of jeans. Please note that usually the width of the straps for jeans is 5 cm, so do not be too lazy to try it on when buying a wide belt! Narrow belts (2 cm) appeared not so long ago, and they are usually chosen by young people.

Belt buckle Casual can be any. A non-standard shape, a large size of the buckle, the presence of engraving, drawing, etc. on it are allowed. Still, this is a belt for jeans, for an informal style.

Trouser (suit) belt. A classic belt for trousers, both for those worn as part of a costume ensemble and for those worn separately. The material of the trouser belt, ideally, is genuine high-quality leather. The edges of this belt are slightly rounded. But leatherette is also suitable if the budget does not allow expensive purchases. The men’s trouser belt colour should be discreet, again classic – black, white or brown. It is desirable that the color and texture of the trouser belt be combined with boots, a briefcase and a watch strap (especially if it is all made of leather).

The width of the trouser belt is 3-4 cm. It is narrower than the belt for jeans. Such a belt must have two loops: one fixed near the buckle, the other moves along the belt.

The buckle of the costume belt is strict, made of one metal, open. Sometimes they make buckles from 2 metals, but a real dandy will never buy such a belt.

Suitable for any trousers and differ from trouser ones by less stringent standards. They can be sustained in standard colours, and are full of brightness. It is used for both trousers and jeans. The width of the product is from 2 to 3.5 centimetres. Such belts are usually smooth, without unnecessary details. They are made of leather or high-quality leatherette, the colour scheme can be absolutely any.

Sports belt. It is quite rare, you will definitely not wear it with a suit. In general, the name speaks for itself, and we will not dwell on this accessory in more detail.

Nail shape is what makes your hand look more flattering. But finding the perfect nail shape for your finger type can be a task....
Read more

On December 20th, 1964 in Vallejo, California, David Arthur Faraday and Betty Lou Jensen had their first date and their last. They parked their station...
Read more

Cumin is one of the essential ingredients in every Indian kitchen. It is used in a majority of curries and stews for flavours and...
Read more

One of the most significant factors that can be an indicator of overall health is your diet. What foods do you consume regularly and...
Read more
Previous article
12 Easy Ways To Improve Your Digestion
Next article
Addiction Treatment In An Inpatient Rehab: What You Should Expect From Them?