Have You Ever Heard About The Watermelon Snow? 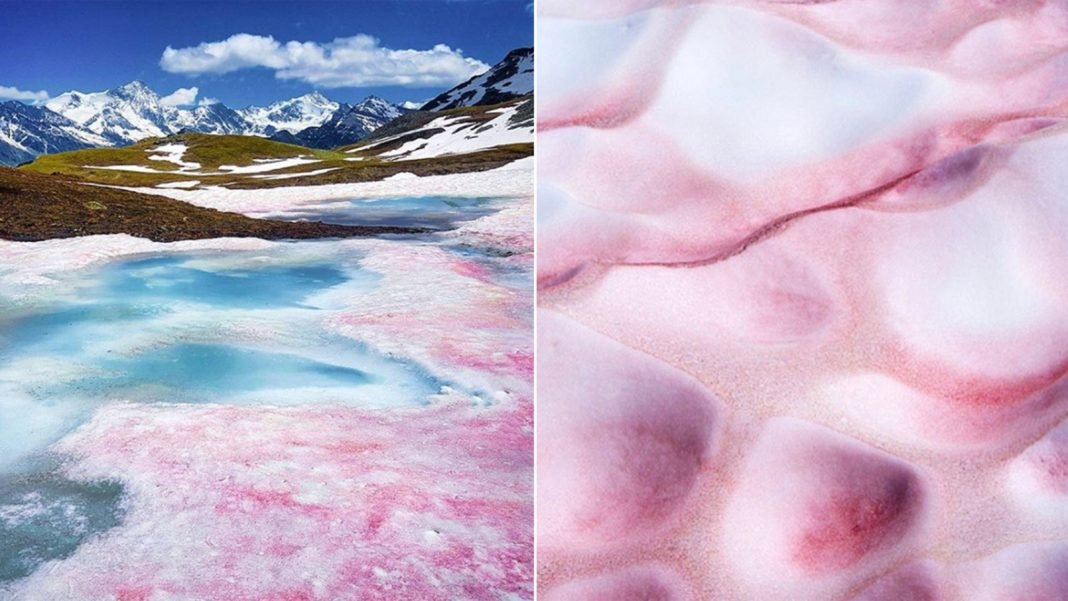 As the scorching Sun shines on us day after day, one cannot resist but wish for something cool like snow or refreshing like a watermelon. But, at altitudes of 10,000 to 20,000 feet, this wish becomes a reality with mountains and plains capped with Watermelon Snow.

People around the world have witnessed the sight of pink snow, which stains their clothes with colour and when melted can be mistaken for red wine.

Table of Contents show
Why “Watermelon”?
What makes it pink?
A Climatic Concern?

Also known as the pink snow, red snow or blood snow, the Watermelon Snow is a phenomenon commonly sighted in the alpine and coastal polar regions of the world during summer. It derives its nickname “Watermelon Snow” not only from its pinkish colour but also because of its scent which closely resembles the sweet smell of a watermelon. Unfortunately, this delicious sounding snow is not to be eaten, as it is a laxative infested with toxic bacteria which may be fatal to humans.

What makes it pink?

For thousands of years, this mysterious snow baffled mountain climbers, scientists and naturalists alike. It even made its first literary appearance in Aristotle’s writings. Some claimed that the snow gained its pink colour from minerals in rocks. Others speculated that it was caused by meteoric iron deposits. But centuries later, the snow was discovered to gain its colour from the Chlamydomonas Nivalis.

The Chlamydomonas Nivalis or Snow Algae is a green algae which contains a bright red carotenoid pigment. This pigment protects it from the sun’s ultraviolet radiation. When the Sun heats up and the snow starts to melt, the freezing temperature and the melted liquid create an ideal environment for this algae to thrive. As these green organisms soak the Sun’s rays they turn red, painting the snow in different hues of pink.

But, the snow is not as charming as it looks.

Scientists around the world have discovered the pink snow to be a major concern for climate change. The snow algae not only changes the colour of the snow but also decreases its albedo. The albedo is the amount of radiation the snow reflects back into the atmosphere.

The pink colour of the snow then absorbs more heat which reduces its ability to reflect sunlight. This makes the surface hotter and the snow melt faster.

Nevertheless, one cannot deny how strikingly beautiful the pink snow is; promising that pink snow angels and pink snowmen could become a reality.

Read Also: Here is how you surf at Pororoca-n -Paradise

Bell in temples In every Indian temple, near the entrance, one can find one or more bells hanging from the top. The devotee rings the bell...
Read more

In this article, we will talk about styling yourself with lace front wigs. There are various wigs available in the market. People may wear...
Read more

Know The People Within Your Neighborhood To Stay Safe

Adopting good safety habits and making sure everyone in your home is aware of good, solid safety protocol, even at the basic level is...
Read more

Sex chat with strangers can be an exciting and interesting experience. It's a great way to explore your fantasies, broaden your knowledge, and learn...
Read more
Previous article
18 Ways to detect a Migraine
Next article
History of Jalebi.

Look Into The City Of 14 Islands

How Much Caffeine Does A Cappuccino Have