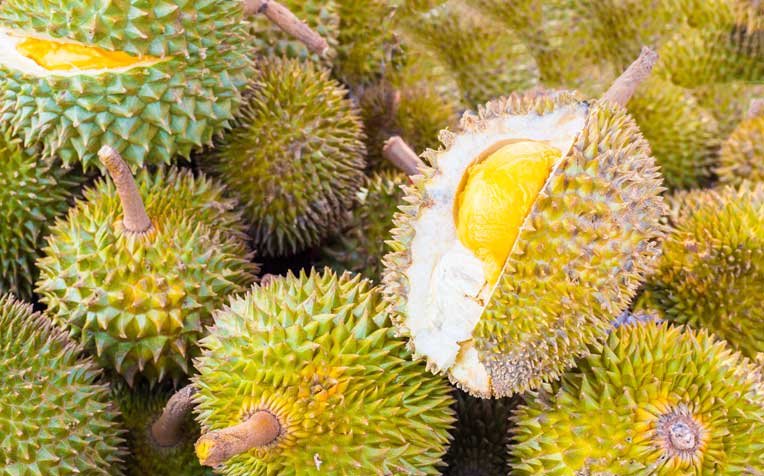 Every person on the planet has their taste. Similarly, everyone is concerned about the fragrance as well. Have you ever imagined what it would be like when the taste is combined with the smell? Awful. Right? So what if nature will give you something like smelliest fruit? Yes, it does exist, and we are here to tell you about Durian – world’s smelliest fruit, or you can also say it the stinkiest one. Durian is the fruit that comes with custard-like texture and with the smell of a dead animal when ripped off.

Table of Contents show
Durian – World’s Smelliest Fruit
Size and Availability of Durian Fruit
Myths about the Durian
What makes the fruit smell like a rotten onion?

The “Duri” word was taken from the Malay-Indonesian language which means “spike”. These spikes could be found in the fruit which has numerous thorns on its outer surface.

Size and Availability of Durian Fruit

The fruit is known as the wicked king of fruits in Southeast Asia because of its size which can be as large as 30 cm. It has a strong odour which is pleasant for some people, and the others find it’s irksome. It is considered as native fruit in Indonesia, Malaysia, and Brunei. The main reason behind its broad availability is animals who are attracted to its rotten smell and left the seeds. Those consume seed, leave it at any other place during excretion. Its use doesn’t always end as a fruit to taste, but it also used in many medical treatments.

Myths about the Durian

Many people are engaged in selling such a stinky fruit with dry and fresh texture. Smithsonian Magazine describes the experience of such fruit as “to eat it seems to be the sacrifice of self-confidence. Its pesky odour becomes the reason of the fruit being banished from most of the hotels and public places in Southeast Asia.

What makes the fruit smell like a rotten onion?

The secret behind it could be found in the research made by a group of scientists in the German research centre. As a result, 50 compounds were found responsible for such a noxious odour of the fruit. Out of which 4 compounds were unknown to the science and eight haven’t been detected in durian.

The fruit is familiar as excellent in taste as compared to other fruits around the world. But it’s disagreeable smell gives it a reason for being disliked by a majority of the population around the world. However, we can find it an excellent example of God’s creation as such things are quite idiosyncratic. So, enjoy knowing more about weird side of the world.

Baking soda also known as soda bicarbonate is an alkaline chemical compound. It is crystalline in form naturally but is turned into a fine...
Read more

Do You Know The Struggle Behind Disney Costumes?

Disneyland, known as the Happiest place. Visit Disneyland, and you will see various Disney characters cheering you up. You can play, shake hands and...
Read more

Being an active traveler means eventually understanding that your safety on some types of trips can be jeopardized. High–intensity hiking, cycling, and climbing can...
Read more

Sex chat with strangers can be an exciting and interesting experience. It's a great way to explore your fantasies, broaden your knowledge, and learn...
Read more
Previous article
Know About The Strange Concepts Behind The Heart Symbol
Next article
Deciphering The Enigma Of The Blood Rain In Kerala

Moles Have An Astonishing Story About Our Personalities.

20 Ways To Stop Your Acidity Problems