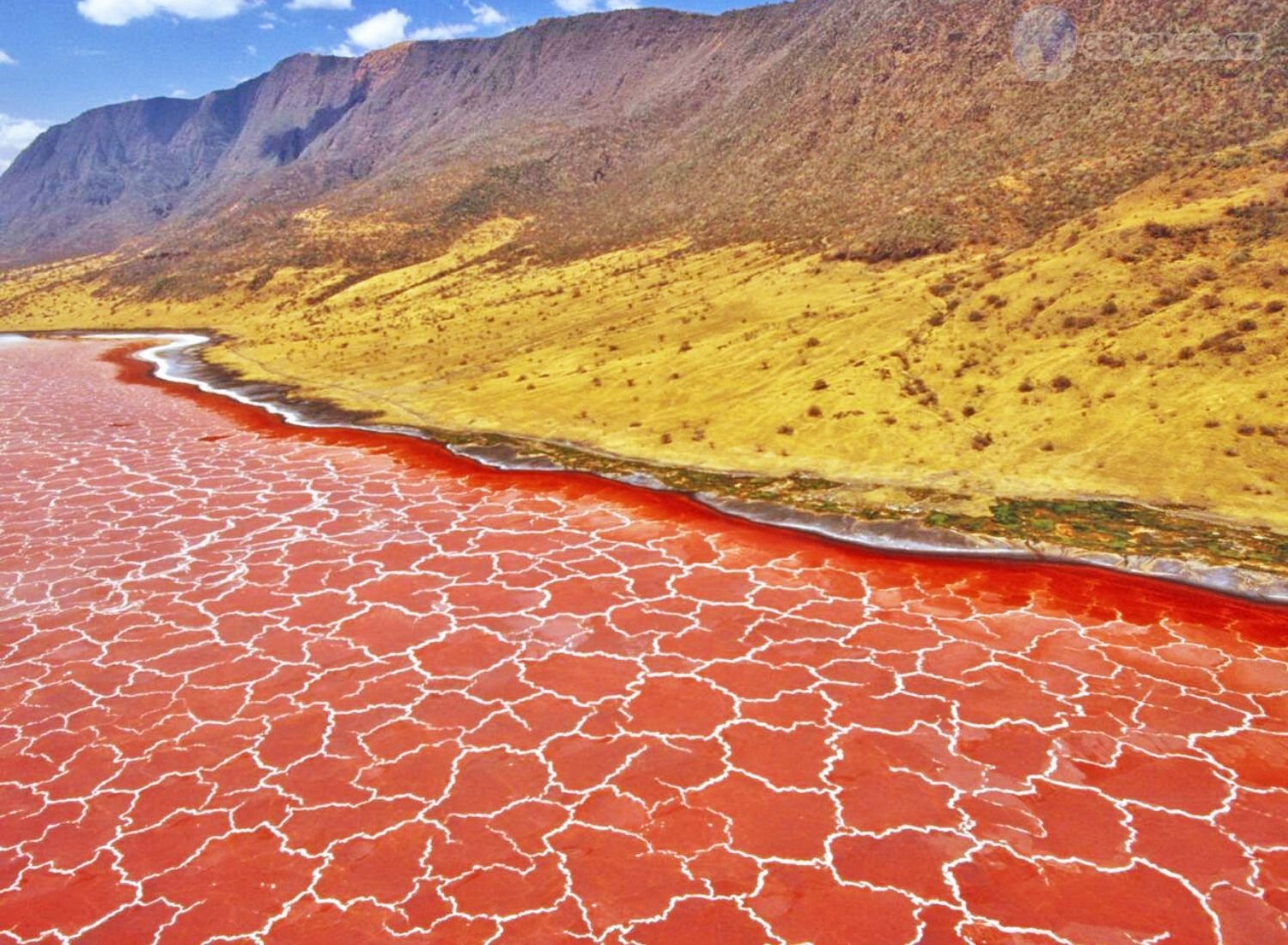 Africa has been the home to unsolved mysteries for ages. The continent is adorned with lands that seemed to have been veiled by nature herself, protected from the grip of the man. Lake Natron is one of those serene creations that has been the source of some of the most phantasmagorical photographs since the past decade. This lake is situated in the Arusha region in Northern Tanzania.

Table of Contents show
What makes it mysteriously fatal?
The secret unveiled
Hell, to most; Home, to some
The pink parade in the barren wetland

What makes it mysteriously fatal?

Lake Natron has been acknowledged as the hell on Earth by many ecologists due to its deadly nature. The lake is typically red to pink in colour with a scarlet crust due to high mineral content and hot springs. The lake is quite shallow; less than five meters and the width depends on the water content. As a shallow lake in an extremely hot climate, the temperature here rises to approximately 106-degree Fahrenheit. Lake Natron is known to be one of the most saline caustic alkaline lakes in the world.

Located in a dry climate, the area has scanty to no rainfall throughout the year and is only watered by few rivers and hot springs. But the twist comes right here, the rivers are saline in nature, and the lake has no option to drain out to sea or larger rivers. Hence, it can only evaporate at extreme temperature leaving behind the salt content, that is, Natron (sodium carbonate decahydrate) and Trona (sodium sesquicarbonate dihydrate). This makes the alkalinity to reach up to a pH greater than 12.

Volcanic ashes from the Great Rift Valley also gets collected in the basin, making it hostile to living organisms. The lavas too contain an appreciable amount of carbonate and less amount of calcium and magnesium levels. Thus, making the lake a storehouse of minerals, alkalinity, and high temperature that makes it unsuitable for life to prosper.

The lake has a high level of natron present in it, after which it has been named. Natron is a mineral salt that ancient Egyptians used for mummification. Natron has an excellent drying and anti-bacterial property that helps to preserve dead bodies by drying out all the moisture from its body and also by preventing microorganisms from feeding on it.

But that doesn’t mean that whenever any living organisms fall in the lake, it gets perished and transforms into stone immediately as some of the sources present it. Animals that die out here, eventually get transformed into hard calcified stone-like statues with time due to the unique chemical makeup of the lake and get preserved with due course of time, which is a gradual process.

Hell, to most; Home, to some

In spite of its deadly nature, the lake is known to be hospitable to a few of the world’s endemic species. The alkaline tilapia, a very rare fish, lives along the edges of the hot spring inlets. Moreover, the lake derives its vermillion shade of red and pink from a few species of halophiles and thermophiles that are an integral part of this lake.

The pink parade in the barren wetland

The lake being shallow is an ideal breeding ground for more than 2 million Lesser Flamingos (Phoenicopterus minor). The flamingos’ nests are built on small islands, which form in the lake during the dry season. It is also said that Spirulina, blue-green algae with red pigments present in this lake, passes on their pigments to these flamingos that feed on these algae and raise their young ones there. Hence, lesser flamingos have a pinkish hue in their body.

The phenomenon of gathering flamingos in large numbers is often referred to as the “pink parade” by biologists. But sometimes the lake also becomes inhospitable to these flamingos when the alkalinity of the water increases and if they come in direct contact with the water in that period. The uniqueness of lake Natron since its discovery has prompted the Tanzanian government to upgrade it to the Ramsar List of Wetlands of International Importance in the year 2001.

Workout supplements are additional product to your diet when you are in a process of body building or weightlifting or losing weight. These supplements...
Read more

Oncology is the study of various types of tumours. However, the study of cancer-causing tumors (or cells) is the common name of Oncology.Oncology has...
Read more

You must have heard and used normal butter often in your mundane life.But, did you know about nutty butter? Well, nutty butter which is...
Read more

You've probably heard of the four kinds of essays. They include argumentative, persuasive, narrative, and descriptive ones. It is vital to know the type...
Read more
Previous articleChernobyl Disaster: The 1986 Nuclear Explosion
Next articleWhat Is So ‘Godly’ About God Particle?

8 Simple Ways To Start A Food Revolution For The Environment