Here Is The Device That Measures Beauty 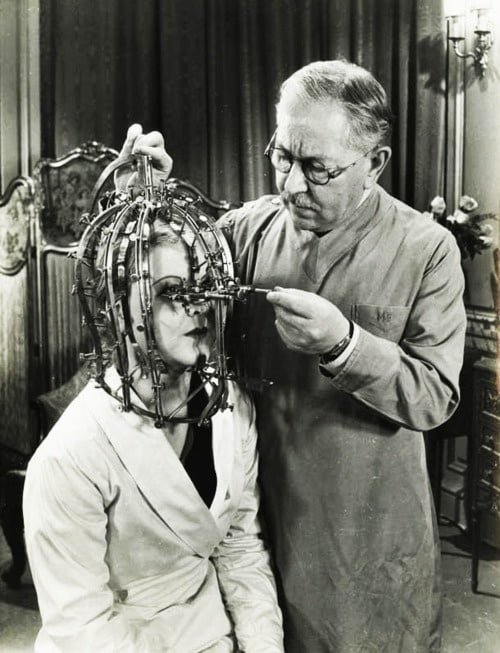 Have you ever heard about a device that can measure beauty or a device that can point out the flaws of the face very precisely? Such a device was found in the 1900s which had the looks of a torture device from ‘Hellraiser’ nightmare.
Max-Factor designed this device called as the beauty micrometer which looks no less than a medieval torture instrument. The beauty micrometer is a scary-looking device with metal strips and loose screws.

Max started working at a very young age and was inclined towards the cosmetic sector. He is also the founder of Max Factor and Company which sold various cosmetic products since 1909. He loved experimenting with different styles of makeup and beauty products.
The beauty micrometer has flexible metal strips rooted which align with the person’s facial features. The word ‘make-up’ was also introduced in the same time period. The strips are held together by a set of 325 screws which can be adjusted according to a person’s face. It is also known as the beauty calibrator.

Read Also: The Connection Between Beauty And Self Enhancement Is Mind Boggling

It was launched in the early 1930s. Soon after the launching of this device, Max Factor started giving beauty treatments to big Hollywood celebrities. He also gave personalized makeup to many celebrities and claimed that whoever took the treatment would qualify as the A-list glamour.

The inventor said that there are two basic parameters to be checked, one was that the height of the nose and forehead should be the same and the other was that the eyes should be separated by the width of at least one eye. In 1929, Max was awarded in the Oscar for his involvement in the craft of film. Only one such device is claimed to exist and is displayed in the Hollywood Entertainment Museum.

Since our childhood, Disney movies have never failed to amaze us. The light-hearted musical stories have always captured our imagination; making us consider ourselves...
Read more

Let us rewind the clock and delve in those days, To know the end of vast settlements. We retrace our steps in the sand of time, And...
Read more

Oceans cover 70% of the Earth’s surface and are the largest habitat in the world. Still, we know only 1% of the sea floor!...
Read more

One of the most significant factors that can be an indicator of overall health is your diet. What foods do you consume regularly and...
Read more
Previous article
Cats vs Dogs: Who Do You Think Is More Smart?
Next article
Ever Wondered Why Donuts Have Holes In The Center?

Do You Know About Sleepy Head Day?