Colonel Sanders Story :Here’s Everything About The Founder Of KFC 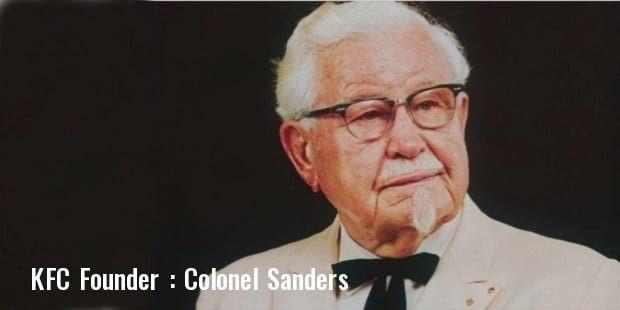 Table of Contents show
1 Many people know Colonel Sanders as the founder of Kentucky Fried Chicken (KFC).
1.1 Early Life Of Colonel Sanders
1.2 His struggles
1.3 His recipe and dedication
1.4 KFC- One of the commonly known fast food joints.

Many people know Colonel Sanders as the founder of Kentucky Fried Chicken (KFC).

But what they do not know is that the life of him was full of struggle from the day he was born. Let us learn about the incredible journey of Colonel Sanders who faced hardships and overcame them to come up with one of the famous fast food joints in the world.

Colonel Harland Sanders was born on September 9, 1890, in Henryville, Indiana. At the age of 6 his father died and after that, he was responsible for taking care of his younger brother and sister. His mother was out on work for many days. He has changed many jobs in his life lifetime. Until the time he was 10 he did many odd jobs including farmer, streetcar conductor, railroad fireman and insurance salesman. Unfortunately, by the age of 16, he left his school and he got married at age of 18.

He had also joined the army but was removed from there. His wife and children shifted to his parents home. Harland had two daughters. He was removed from many jobs. When he started earning some good amount of money he convinced his family to come back home.

Before he got retired at the age of 65 he used to work at a restaurant for many years. At that time too he was penniless. He got the first social security check of one hundred and five dollars on his retirement.

His recipe and dedication

He then started travelling by car to different restaurants he cooked his fried chicken recipe on the spot. If the restaurant owner liked the recipe they used handshake agreement to sell Colonel’s chicken. There was a deal colonel had put in front of the first KFC store, for every chicken piece they sold he should receive a nickel. He used to provide packets of a secret recipe of herbs and spices to avoid them knowing the recipe.

KFC- One of the commonly known fast food joints.

By 1964, he sold the company to more than 600 outlets at $2 million to a group of investors and was also listed on the New York Stock Exchange in 1969. In 1976, the Colonel was ranked as the world’s second most recognizable celebrity.

He was still a spokesperson at KFC he used to visit different restaurants around the world till he died of Leukemia on December 16, 1980, at the age of 90, in Louisville, Kentucky.

This person became a founder of KFC at the age of 65 when people get retired. Colonel Sanders proves that “It’s never too late to start to all over again”.

8,275FansLike
2,100FollowersFollow
220FollowersFollow
Previous articleThe Connection Between Beauty And Self Enhancement.
Next articleSuzanna Goodin: Here’s An Interesting Story Of The Inventor Of Edible Spoon

Try These High Heel Hacks And Take Over The World Like A Pro!