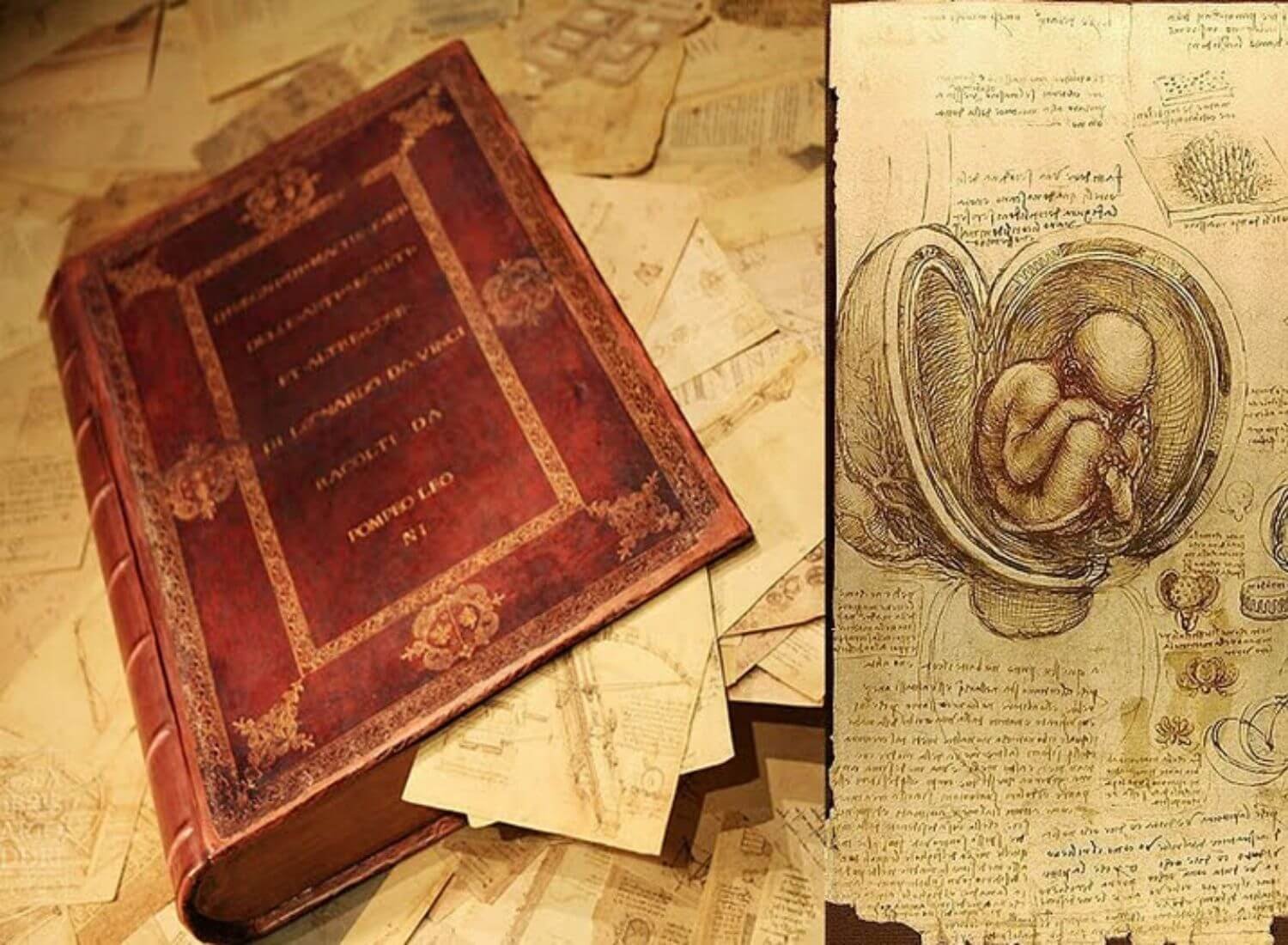 Table of Contents show
What is Codex Leicester?
Who wrote it?
What does it contain?
The book was passed down through many generations.

What is Codex Leicester?

Codex Leicester is a small manuscript that was written and published in the latter half of the first decade of the 16th century i.e. in 1510. It consists of 18 leaves of folded paper, with 72 pages (36 sheets) of illustrations and text in total. The size of 36 sheets of paper is 29 × 22 cm.

Leonardo da Vinci is most remembered for his brilliant masterpiece of ‘Monalisa’. But, it isn’t the only masterpiece that he created. He created another masterpiece which actually wasn’t a painting. In fact, it was, a book! Astonishing isn’t it?

Leonardo da Vinci wrote ‘Codex Leicester’, which was also known as ‘Codex Hammer’ for a brief point of time. He wrote it as a collection of famous scientific writings, which he named after Thomas Coke, who later was called the Earl of Leicester. He purchased this book in 1719. The book is a mixture of observations made by Vinci. It also offers a deeper insight into the inquiring minds of Renaissance artists, scientists, and thinkers. It also beautifully illustrates the exceptional relationship between art and science. And explains the scientific process and the creativity included in it. Vinci’s observations include topics and theories on astronomy, the properties of water, rocks, fossils; air, and celestial light.

What does it contain?

The book is an 18-page document. And each page is folded in half. Vinci wrote the book in Italian. He used mirror writing to note down his observations. He also made extensive use of drawings and diagrams to illustrate his writings.

The book was passed down through many generations.

Many famed people have purchased it. Giovanni Della Porta, Michelangelo’s student, was the first owner of the book.

The book was then purchased by Giuseppe Ghezzi, who was an Italian painter living in Rome during the Baroque period. He had the book with him until 1719.

In 1719, Thomas Coke, the Earl of Leicester himself became an owner of the book till 1759. The best part about Codex Leicester was purchased by Thomas Coke at a price that was the highest selling price of the book at that time and since then it has always remained the most expensive book in the world, ever!

The Codex was then purchased at an auction from the Leicester estate in 1980, the person who purchased it was a wealthy industrialist and renowned art collector Armand Hammer and he purchased it for $5.1 million ( $16 million according to present rates).  This book was later named Codex Hammer. As Hammer commissioned Leonardo Da Vinci scholar, Dr Carlo Pedretti to get the loose pages together and compile the whole book into its original form. Then for the next 7 years, he translated pages into the English language and the project got completed in 1987.

Then Bill Gates, everyone’s favourite billionaire, purchased this book on November 11 in 1994 at a whopping cost of $30, 802, 500 in an auction conducted by Christie’s, and after this, the price paid by Thomas Coke became the second-highest selling price and Bill Gates again was able to maintain the title of the world’s most expensive book for Codex Leicester.

Bill Gates later scanned the pages of the book into digital files to turn them into wallpaper and screensaver for Windows 95 desktop theme as well.

The book has travelled around the world. The has been the subject of numerous exhibitions across the globe, Codex Leicester recently was on a display at the North Carolina Museum of Art from October 31, 2015, to January 17, 2016.

Codex Leicester: The most valued book in the world is also the most expensive one. Seems legit, right? Valuable knowledge comes at a valuable price.

From a long solo journey to spending a night binge-watching content on OTT Platforms, there is a splendid shift in the lifestyle of millennials. They...
Read more

Everyone wants to win in a game, no matter which game is being played. Be it a live session or an online game; nothing...
Read more

The months of winter are cold and dark in a lot of places in the world. Living in such conditions for prolonged periods of...
Read more

Mukbang and ASMR eating has been the ongoing trend of this "new generation," which is usually on the phone screen, scrolling through social media...
Read more
Previous article
Heard about Edison of India G.D. Naidu?
Next article
History Of The Electric Tattooing Machine.

Kleptomania- A Disorder That Makes You Steal!