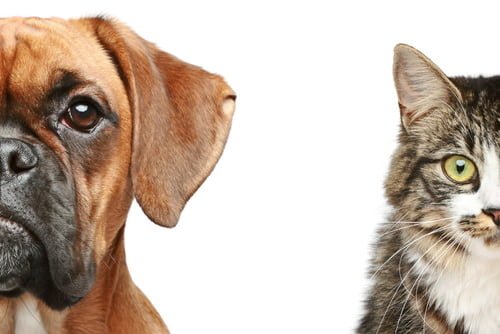 The debate of who of these two pets is smarter is going on since ages. Dog lovers claim dogs to be more loyal than cats. Indeed they are! But on the other hand, cat lovers claim that cats are more intelligent than dogs.

Theories such as dogs have a larger size of brain support the statement that dogs are smarter. But the size of the brain does not indicate the smartness of the animal. For example an African Parrot, Alex is a tiny animal with a tiny brain, but he can outsmart dogs by his vocabulary skills.

Read Also: How  The World’s Most Expensive Coffee Is Made From Cat Poop?

The fact that dogs are more social and loved than cats also brings this debate to dog’s side. The more social the animal is, the more intelligent and understanding it becomes. Cats, on the other hand, are claimed to be a ‘moody’ pet. They are only social if necessary.

Dogs are often seen playing, jumping and pleasing their owner, but cats are seen huddled like a heap of meat on the couch. Cats can also be trained to become smarter pets like dogs. Many people have trained their cats to an extent that they can even play the piano!

Dogs, after all, are also seen helping humans in cases no animal could ever help. Dogs have an enormous smelling sense which makes them a member of police squads. An experiment was done to test the intelligence of cats that was tying letters around their neck and checking if they reach the correct person. All the cats were home in less than 24 hours but that was very slow as compared to pigeons.

Also, it is scientifically proven that dogs have a larger vocabulary than cats. But, at the same time cats have an excellent memory processing capacity. According to some experts, cats are as smarter as dogs, but they do have a different type of intelligence.

Whether you’re a first-time fitness mom or are looking to get back to the gym after a long-time workout break, it can be difficult...
Read more

From decorating homes with indoor plants to basket walls, monochrome to classic blue, introduced a new wave of trends, instead of grabbing on popular...
Read more

Cheese has been an artisanal food since 8000 BC and till date, it still remains to be a favorite chow in the world. Apart...
Read more

Your body is an incredibly complex machine. There are still plenty of secrets regarding how some parts work, and research into these things is...
Read more
Previous article
It’s Raining Diamonds On Jupiter And Saturn!
Next article
Here Is The Device That Measures Beauty

Weirdest Food Eaten Around the World that will Blow your Mind