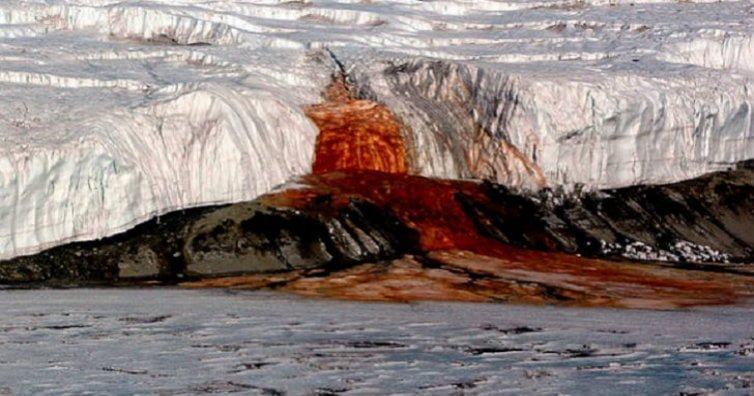 The mysterious Blood falls of Antarctica has always been a matter of speculations and discussion for geologists and researchers worldwide. This grotesque phenomenon of blood like water gushing out of a glacier was discovered by a geologist named Taylor Griffith in the 1990s, after whom the glacier was later named as the ‘Taylor Glacier’.

To explain this perplexing situation, Griffith formalized a hypothesis that the red blood like liquid could be a result of algae blooms on the glacier which were getting washed into the water. Several species of Algae are known to survive and live under extreme climatic conditions with the ability to show similar discoloration, his hypothesis was based on relevant fact. But even so, it was never verified and the enigma behind the blood falls remained unknown.

Last year, a team of researchers reported that they had found an enormous network of underground water with high salt and iron content beneath the Taylor Glacier. This report laid some groundwork for the recent study which has finally uncovered the much-speculated mystery behind the Blood Falls. The study says that due to the high concentration of iron in the water, the saturated blood like the color of the falls is a result of the iron atoms in the water turning reddish when exposed to oxygen in the air, and transforming into iron oxide or rust, giving it the blood like red color.

Consequently, using the radio echo sounding technology (RES), which involves sending electric signals in the glacier and apprehending the signals that bounce back,  the researchers from University of Alaska Fairbanks scanned Taylor Glacier to understand the nature and of the flow of the brine. They discovered that the intricate network of brine penetrated 5 kilometers up from the end of the Taylor Glacier.

The research also highlights the presence of certain microbial communities underneath the glacier. These microbes have been known to exist without oxygen under harsh climatic conditions similar to how life originated on Earth, thus hinting towards the possibility of the existence of life on other planets even with the absence of a habitable atmosphere.