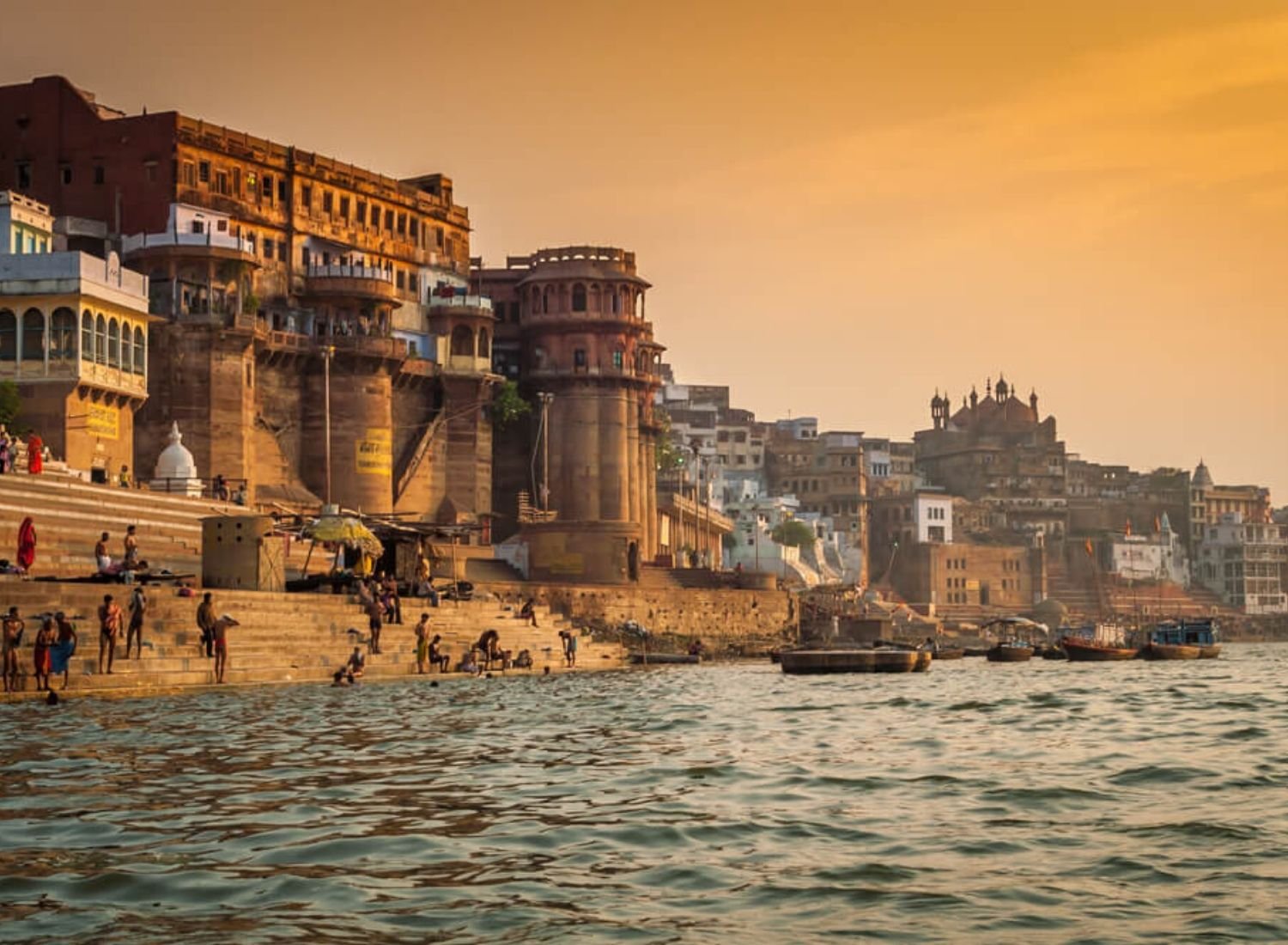 In Banaras, life starts from praying to the Sun God and taking dips in the water to immersing the ashes of the lost one into the river. It is often said that the essence of a city lies in its rustic buildings and the old narrow lanes. Even though the lanes are crowded and busy, but maneuvering your way to the ghats reveals the stories and the legends associated with this old city.

Every building, threshold, and countless sweet shops have their own stories to tell. The true spirit of this place lies in the buildings having intriguing designs, ghats, sweet shops, cows roaming around the lanes, the ‘chai tapri’ i.e tea stalls, and the people who help you through the labyrinth of the lanes. Every lane opens to a new lane, ultimately leading to the ghats. Amidst the hustle and bustle of the city, one can feel the spirit of this old city.

Varanasi, often called Banaras or Kashi, is one of the oldest inhabited cities in the world. Tributaries of Ganga, Varuna, Assi, and Rajapur contributed significantly to the establishment of Varanasi. The name ‘Varanasi’ came from the rivers Varuna and Assi. Varanasi was the first settlement of the Aryans. In the 6th century BC, it was the capital of the kingdom Kashi. During this time, Buddha gave his first sermon at Sarnath.

There are many pieces of evidence for Varanasi to become one of the oldest inhabited cities in the world. Shreds of evidence such as Jain literature, jataka stories, and revelation of human occupation in Varanasi in Atharvaveda. In Atharvaveda, river Varuna is referred to as River Varnanavati.

On the ghats of this mystic land, life and death flourish together. Dashashwamedh Ghat has a long row of wooden platforms for the pilgrims to bathe in the River Ganga. It is believed that bathing in Ganga washes away all the sins. There are around 88 ghats in Varanasi. Among the ghats, all the actions happen in Dashashwamedh Ghat.

According to Hindu mythology. Lord Brahma welcomed Lord Shiva to this ghat. In this ghat, priests perform ‘Ganga Arti’ every evening. Harishchandra Ghat and Manikarnika Ghats are dedicated to the cremation rituals. There has not been a single day when there has not been any cremation done. It is uncanny as well as peaceful to watch life and death near the holy river.

Kashi Vishwanath Temple is located on the banks of holy river Ganga and is one of the twelve Jyotirlingas. It is one of the holiest shrines in Hinduism. The structure has seen many natural events and invasions. People stand in long queues for hours to reach the temple. It is believed that one should visit the temple at least once in their lifetime. A visit to the temple and a bath in the river Ganges is believed to help one reach Moksha.

In Banaras, people are directly or indirectly connected with religious chores. The city is referred to as ‘mini-India’ because of the diverse religious and cultural contributions of different religions. The people of Varanasi play an important role in showcasing the art, heritage, culture, history, and music of this mystic land to the western world.

Varanasi is famous for quite a number of delicacies. one should not miss having tamatar chaat, kachori sabzi, and choora matar. The best time to visit Banaras is during the winter. In winter, you get ‘malaiyyo’ at every nook and corner of the lanes. Malaiyyo is a sweet dish made of milk froth and flavored with saffron and cardamom. It completely dissolves, in fact, vanishes when you take a spoonful of it into your mouth. It has a divine feeling of its own. Not to forget, kachori sabzi of Ram Bhandaar in Thatheri Gali and tamatar chat of Deena chaat Bhandar are eat worthy. Thandai and Banarasi Paan are the regal delicacies of Banaras.

In Banaras, one can experience the joy of birth and grief of death in close vicinity. The divine boat ride in the River Ganga inculcates a distinctive spiritualistic mindset into our souls. In the evening, you can watch the Ganga Arti in the Dashshwamedh ghat as well as funeral pyres in the Manikarnika Ghat from the boat. Water is viewed as a source of life and creation. In Hindu tradition, burial in the holy Ganges is a benign end to the never-ending cycle of Moksha i.e complete Nirvana.

‘Varanasi is the new and official name given to this holy place. Kashi invokes a spiritual feeling and Banaras is the feeling of the existence of a mystic city.’

Being a woman in a world of business and entrepreneurship is never easy. Aside from balancing house chores and family duties, women are also...
Read more

What comes to your mind when you think of a funeral? Burial, cremation or the internment of the mortal remains of the body? But the funeral rituals of...
Read more

A mommy makeover is a popular cosmetic surgery procedure that many women choose after pregnancy and childbirth to restore their pre-pregnancy body shape. The...
Read more
Previous article
10 Effective Tips For Strong Nails
Next article
Top 10 Real Life Cases Of Warren You Can’t Miss