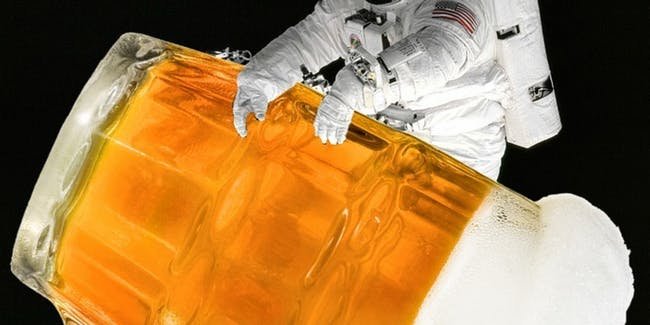 Alcohol in space is not a new concept. Right from 1969 when Buzz Aldrin took communion to the moon and drank wine. Due to the absence of gravity, the wine curled up to one side of the cup. NASA kept this fact hidden as it is not exactly the best idea for an astronaut to drink while in space.

Even in the 1970s, NASA allowed sherry to be consumed during Skylab missions. The reason being, sherry is a stable alcoholic drink. Wine would have to be repackaged and beer would cause a bubbly mess. But, this never went through in practice because of the public’s outrage on astronauts consuming alcohol. Since then, NASA has put a strict ban on alcohol in space.

Table of Contents show
But what if there was alcohol already existing in space?
Did the booze enthusiast in you just rise from death?
How is this possible?
What might space booze taste like?
image source

But what if there was alcohol already existing in space?

There indeed is. About 6500 light years away, near a constellation named Aquila, lies this magical booze cloud. It was discovered in 1995 and is in a region named W3(OH). Unfortunately, most of it is methyl alcohol, which is also known as wood alcohol and is unfit for consumption. But, there have been some uncommon findings of ethyl alcohol too, which is the drinkable kind. It does contain enough ethyl alcohol to make more than 400 trillion pints of beer.

Did the booze enthusiast in you just rise from death?

Sorry, this cloud lies over 58 quadrillion miles away.

There is another liquor store that space has maintained. It is called the Sagittarius B2 cloud containing 10 billion liters of methanol. Similarly, the center of the Milky Way galaxy holds a 288 billion miles wide bridge of methanol infused clouds. Undrinkable but fascinating, isn’t it?

How is this possible?

It is not unknown that a lot of molecular chemistry is prevalent in space. Molecular clouds, dust, and all sorts of chemical compounds exist in space. Alcohol is a relatively simple molecule, made of relatively abundant elements (hydrogen, carbon, oxygen), so it shouldn’t be surprising that it exists in large quantities in space. They are mostly formed when new stars get formed. The alcohol attached to the dust particles forming the star gets detached and gets converted to gas. Hence, these gigantic clouds can help astronauts in determining how and what the biggest stars are made of.

The Sagittarius B2 cloud has an answer to this. The cloud contains ethyl formate, the ester that is known to have given raspberries their taste and smells like rum. Raspberry flavored rum. Not bad!

Those days are gone when wearing specs was a synonym for being a nerd or a boring person. We are in a century where...
Read more

There are a variety of Delta-8 pre-roll brands available on the internet market. Each claims to be made from the highest quality hemp flowers...
Read more

India is prominently known for its complex and diverse culture. The uniqueness of India lies in its distinct traditions and different groups of people....
Read more

Your body is an incredibly complex machine. There are still plenty of secrets regarding how some parts work, and research into these things is...
Read more
Previous article
This Unusual Restaurant That Requires A Password For Entry
Next article
All About Cloud Computing – A New Way Of Storing Big Data

8 Incredible Benefits Of Walking That Promote A Healthy Life