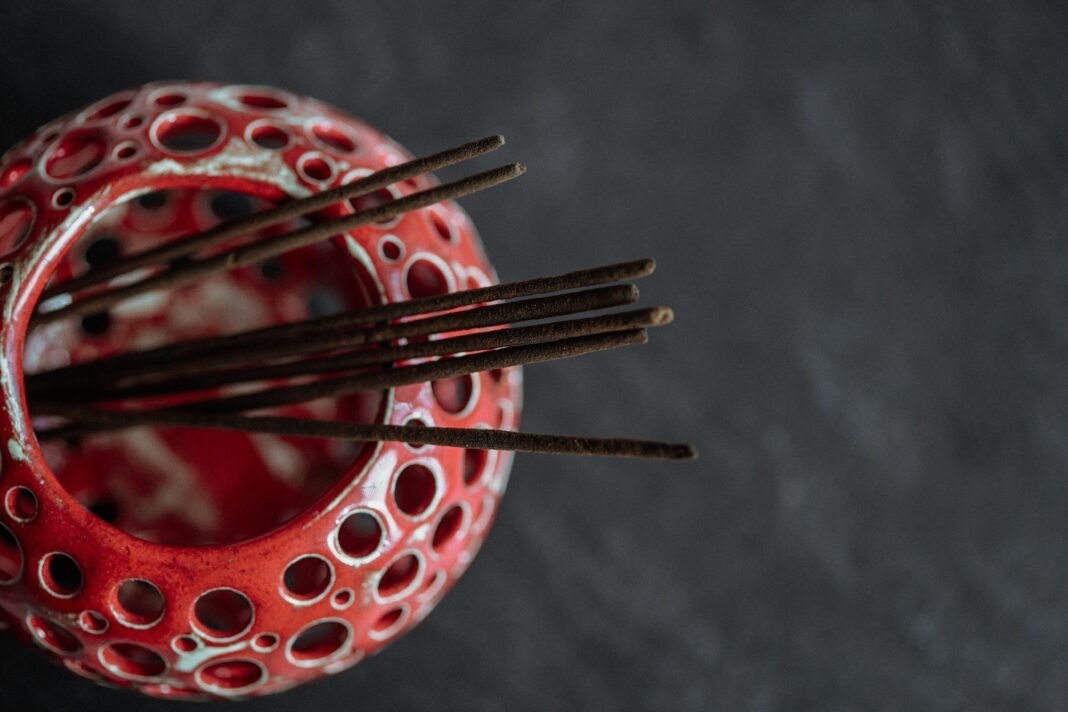 When we hear the name incense, the first thing that comes to our mind is incense stick or ‘Agarbathies’ associated with the country name, ‘India’. If you don’t know, India is the leading brand compared to other countries in incense production and is also an essential exporter for other countries. The incense sticks have been burnt throughout India for years and passed to other Asian countries.

First, let’s look at the making of Agarbathies. The Agarbathies or incense sticks are made of bamboo sticks, a paste made of charcoal dust or sawdust and gum/joss/tabu powder.  The perfume traditionally consisted of powder of ground ingredients, but nowadays, it consists of perfumes or essential oils solvent.

The paste is applied to the bamboo sticks, then by either using the traditional method they are wrapped in masala when they are moist and left to dry for many days and then they are dipped in an aromatic solvent. The masalas or powder used in traditional methods consist of amber, myrrh, frankincense, and halmaddi (the resin of a tree) as a fragrance for the finished incense.

Western consumers demand Halmaddi because of its association with Satya Nag Champa. This earth-coloured liquid resin is extracted from Ailanthus Triphysa Tree, which is semi-liquid when fresh and turns to a brittle solid when it evaporates and ages; some incense makers mix in honey to keep it pliable. There was deforestation caused due to crude extraction methods forcing the Forests Department in India to ban resin extractions in 1990; this caused the prices of Halmaddi to rise, which decreased its usage.

The rolled, extruded, or shaped method (still used for dhoops and cones) of making incense sticks was replaced with bamboo sticks as core which originated in India at the end of the 19th century. Cones and logs and benzoin resin (sambrani) is an incense paste formed into a pyramid and log shapes then dried.

Table of Contents show
1 History
2 Productions
3 Why Are They Harmful?
4 Now, Let’s Take A Look At How To Avoid These:
5 Leave your vote

The sources of incense are traced back to the Atharva-Veda and the Rigveda. At that time, incense burning was used to create pleasing aromas as well as a therapeutic tool. Incense was considered the first use in the phase of Ayurveda for healing, which Monks did.

Soon this healing tool assimilated with religious practices in the Early Hinduism period; it also became an integral part of Buddhism.  Around 200 CE, incense stick making was introduced to China by Buddhist monks.

The Agarbathies is produced entirely or either partly with hands or wholly or partially by using machines. There are semi-automatic machines to apply the paste, perform- dipping, and also for packing. Applying scent and paste to nearly 200,000 raw un-perfumed sticks, which are hand-rolled by part-time working women, is done with these fully automatic machines, almost in 5,000 incense making companies in India. An experienced home-worker can produce four thousand raw sticks in a day.

Karnataka is the Capital Of Agarbathi (Incense Sticks), Bangalore and Mysore being the leading manufacturing cities. There has been an increase in the production of incense sticks in every part of India over the past few years. The market is dominated by producers from Maharashtra, Gujarat, and Western India. The Cycle Pure Agarbathies and ITC with their Mangaldheep are the prominent producers in the national level markets.

Why Are They Harmful?

As we saw, Agarbathies or incense sticks got an irreplaceable place in the Hindu, Buddhist, and Christian religions. Agarbatties have now become an integral part of every holy ceremony. Agarbathies are considered to purify and freshen the air. But here are the reasons as to why it is harmful as much as a poison.

According to scientists, the smoke emitted by the Agarbatthies can cause genetic changes that can cause cancer. Another study said that the smoke produced by incense sticks is more hazardous than cigarette smoke. The study conducted on the most common Sandalwood and Agarwood Agarbathies (incense sticks) at the South China University Of Technology revealed that their daily usage causes more harm to our health. Researches of The Quint have found out that the incense was mutagenic (causes DNA changes at cell level), genotoxic (causes genetic changes leading to cancer), and cytotoxic (so toxic that it kills your cells), which results in a high risk of cancer than smoking.

The Health Site reported that in the Journal of the American Cancer Society, a study said that long term exposure to incense smoke could put us at risk of upper respiratory tract cancer. The fumes produce pollutants that cause inflammation of the bronchial tubes, which pass air to the lungs, which results in chronic obstructive pulmonary disease (COPD) and asthma. Migraines, headaches, and forgetfulness can be caused due to A high concentration of these hazardous fumes are also known to trigger neurological problems.

Now, Let’s Take A Look At How To Avoid These:

So, next time when you light Agarbathi to please the Almighty, remember that they generate severe indoor air polluting gases, including carbon monoxide, which can cause serious health issues. Please think twice before burning them.

8,359FansLike
2,100FollowersFollow
224FollowersFollow
Previous article10 Steps to Becoming a Pro In Data Science In 12 Months
Next articleDelos- An Island With Rise And Fall Of Wealth And Habitations.

The Ghost Of Peshwa Narayanrao In Shaniwar Wada

5 Tips To Make Your Travel Cheaper!

5 Jobs That Pay You For Sleeping