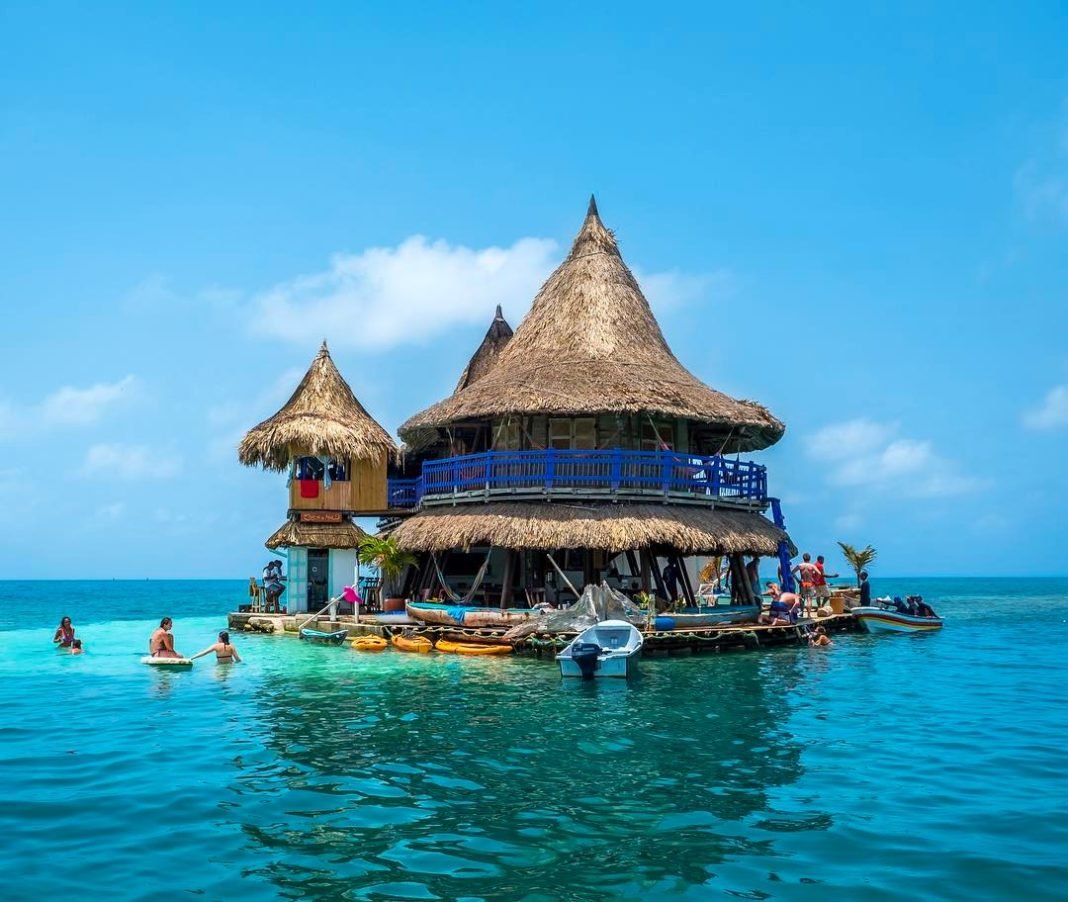 If you have the urge for a little out of the blue adventure and have planned a bucket list centered on travel, then I hope you get on that plane as soon as possible and satisfy your travel desire by visiting these strange and beautiful places from around the world.

Waitomo Glowworm Caves are a popular attraction on the North Island of New Zealand.

The caves shimmer due to Arachnocampa luminosa (a type of glowworm).

The Waitomo Glowworm Caves offers its visitors a three-level tour costing approximately NZD $55 for adults and NZD $25 for children. The first level begins from the top of the caves and the Catacombs. In the second level, the visitors are taken to the banquet chamber where they can take a break to enjoy their lunches and the third level consists of a visit to a cathedral downside. The tour is often guided and concludes with a boat ride into the Waitomo river which leads you to the Glowworm cave.

You can visit the caves all year round to see these tiny glittering specks.

Hailing from the Flores island in Indonesia, Kelimutu is one of a kind volcano as it has tricolor lakes in each of its craters.

The volcano has gained attention due to its color-changing lakes. Some days they are blue, green and black while other days they turn into white, red and blue. Visitors have also seen the lakes turn into a brown tint, similar to a pool full of melted chocolate.

You can board a flight from Bali to Ende and then reach Kelimutu through a 3-hour drive, where several accommodation facilities are offered to tourists. A small town named Moni which is at a distance of 13-15 kilometers from Kelimutu is the nearest spot lying towards the mountain.

The mountain is surrounded by loads of flora and thus, visitors can only walk or hike around the lake as other areas might be dangerous.

You can view the lakes from May to September and can even catch the sunrise in Kelimutu by visiting the mountain early morning.

Known for its rich-in-mineral thermal pools flowing through travertine terraces on the hillside, Pamukkale is a tiny town in Turkey.

These shimmering blue waters in white rock have attracted a number of tourists from all around the world for years and have also been a World Heritage Site.

You can visit Pamukkale by taking a flight from the Denizli-Cardak airport or take a 4-hour journey via a nearby bus or train station.

The best time to visit Pamukkale is from April to mid-June.

Commonly known as the River Of Five Colors or Liquid Rainbow due to its vibrantly colored river bed, Caño Cristales is a river situated in the Meta province of Colombia.

In order to visit the ‘most beautiful river in the world’, you can board a flight from Bogotá to La Macarena and then book a trip to the river via several hotels.

Apart from the red algae in the river, there is a lot into the Caño Cristales tour. La Macarena National Park, which is based beside the river, is home to 2000 plant species and 500 birds, 1,200 insects and 100 reptile species.

Also before you dream of seeing the beautiful sea bed of Caño Cristales, make sure you visit it between July and November for a once in a lifetime experience.

The Door to Hell or Gates of Hell or Darvaza gas crater is a natural gas field in Turkmenistan.

Today, even after 40 years this barren crater has become one of the major tourist attractions in the world.

To sight the Door to Hell, you can take a 3-hour bus ride from Ashgabat (capital of Turkmenistan) to Dashoguz which passes past the Darvaza village. Later, you can walk 7 miles or either board a taxi from the village in order to reach the crater.

You can also book a tour to the Door to Hell via several agencies, which also allow their customers to camp around the crater in traditional yurts (a round tent) and enjoy the other attractions side-by-side.

For a fiery and lively experience, you can even book a night tour.

Over the years, mass tourism has been flourished in Peru as many tourists were attracted to the colorful stripes on the mountain present due to its mineralogy composition.

To view this aesthetically beautiful mountain, tourists can take a 2-hour ride from the city of Cusco and reach the Pitumarca village which forms the main entrance of the Rainbow mountain. From there you can walk or go on horseback or hire motorcycles or cars to reach on the slopes of the mountain. You can also take a 1-2 hour drive on a non-paved way on the mountain which has a number of points for viewing the valley.

The best time to visit and hike on this colorful mountain is in the dry season or in the month of August. Many shepherds are also seen herding llamas and alpacas on the mountain.

The Great Blue Hole lies off the coast of Belize and is a paradise on earth for recreational scuba divers and snorkelers.

You can board a flight from the famous Ambergris Caye airport and then take a 2-hour rental speedboat drive in order to reach the Blue Hole. Several agencies also offer a 3 seater plane and helicopter ride which is worth $200 per person, but to be on a safer side, a boat is an easy and affordable option.

This 407 ft marine sinkhole is also home to a number of fish species like the hammerhead shark, parrotfish, bull shark, reef shark and others.

Nestled on the tip of Mexico’s Yucatan peninsula, Las Coloradas, “the reds” (in Spanish) is home to these bright and beautiful pink-colored lakes.

The lake gets its coloration from Artemia salina (brine shrimp), Dunaliella salina (a type of algae) and several other bacteria that are present in these mid-high salinity ponds thereby giving it orange, red and pink tints.

You can reach Las Coloradas from Cancun, Tulum or Playa del Carmen via a 3-hour drive. After reaching Las Coloradas, you can only view the lakes with the help of a guide which will cost you around 50 pesos for a 20-30 minute stroll because the lakes are a private property owned by the salt factory workers.

It is also prohibited to swim or even dip your toe or finger in the water because it affects the composition of the saline water.

You can visit the lake all year round but the best part of seeing the pink lake is on a fine, sunny day. Sometimes in early mornings or evenings, the lake is also thronged by a number of flamingoes.

Situated in northeastern Brazil and located in the Maranhão state, Lençóis Maranhenses is a national park that stretches up to 1550 sq km. It has immensely expanded sand dunes filled with crystal-clear lakes and pools between them due to the annual rains from the Amazon River and nearby wetlands.

You can visit the national park by boarding a flight from São Luís International Airport and from there head to Barreirinhas or Santo Amaro do Maranhão via a 3-4 hour ride through a private cab or van. You can also take a bus from Barreirinhas for a safe and affordable journey.

The desert comes to life from May to September when the rain forms the little pools. You can also visit the lagoons during June, July and August.

Other major attractions are the mangroves, beaches, amazing fauna and flora residing in the national park.

Did you just see your clock strike at 11:11 again? Do you feel it too? Do you also start feeling a magical spark within your...
Read more

Your body is an incredibly complex machine. There are still plenty of secrets regarding how some parts work, and research into these things is...
Read more
Previous article
Marijuana Magic- the Science Behind This Powerful Drug
Next article
Include Supplemental Plans in your Health Insurance: Dental Insurance Options